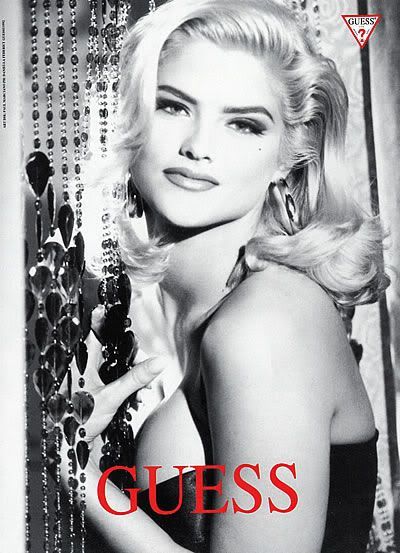 Ten years after Anna Nicole Smith’s fatal overdose, Sarah Marshall looks back at the reality TV star’s often scandalous and finally tragic life in an article for Buzzfeed. Anna was a huge fan of Marilyn, and even rented her idol’s final home in Brentwood, Los Angeles for a while. Although she frequently emulated Marilyn’s voluptuous blonde image – most notably in her retro-style ad campaign for Guess – Smith was less an icon of Hollywood than a modern-day tabloid phenomenon. Nonetheless, the parallels between their Cinderella stories are both striking and sad – and if nothing else, Anna Nicole’s untimely demise highlights the emptiness of celebrity worship.

“For the Hollywood origin stories we know to be satisfying, the heroine in question must have no idea she is worthy of such attention until she is suddenly rescued from obscurity. Especially if she is to be remade as America’s next great sex symbol — as Anna Nicole Smith was in 1993, when she suddenly saturated American media, appearing on magazine covers, billboards, and screens of all kinds, and found herself touted as her decade’s Marilyn Monroe.

She also had not just one dream home, but as many as she wanted — though she was never clear on how she was able to afford them, or why her rise to fame had been so lucrative. She moved into a new house in Houston, but city life was still an adjustment (‘When she could not sleep,’ Dan P. Lee wrote in New York magazine, ‘she’d have her favorite sheep brought there from the ranch to cuddle with’). And when Anna went to Los Angeles to meet with all the photographers and directors who suddenly wanted to work with her, she rented a house that Marilyn Monroe had once lived in.

From 1992, when she made her first appearance in Playboy, to her death on Feb. 8, 2007, Anna Nicole Smith occupied the story of the beautiful girl lifted up from the dust, and then the story of the beautiful woman destroyed, and sometimes both. ‘From the moment Anna Nicole got famous,’ reporter Mimi Swartz later wrote in Texas Monthly, ‘she told the world that her role model was Marilyn Monroe. It was a shrewd move, as it linked her image with one of the greatest American icons of all time, and it had a neat logic: one platinum-haired sex symbol taking after another, one poor, deprived child latching onto the success of another.’

‘I can just relate to her,’ Anna said of Marilyn Monroe. ‘Especially after I got my body — then I really could relate to her.’ She seemed to be following in Marilyn’s footsteps less by recreating her famous body than by realizing that a body could be created: that your physical self could be both the tool that rescued you from the world you knew and the shield that protected you from it.

The body that had been too much for the men of Houston was, in the pages of a magazine, suddenly just right. The Guess campaign also marked the moment when her new identity snapped into place, as it was Paul Marciano, Guess president, who rechristened her Anna Nicole. By emulating Marilyn Monroe, who herself seemed to embody her period’s idealized essence of feminine sexuality, Anna Nicole Smith had become, in the words of psychologist James Hollis, ‘an imitation of an imitation,’ unburdened by any troubling specificity.”