Newsday have dug into their archives for an account of Marilyn’s belated arrival in New York on July 2nd, 1957, from her summer home in Amagansett, to launch the construction of a new Time-Life building.

Arthur Miller wrote about the event in his autobiography, Timebends, recalling his astonishment at Marilyn’s star power – who else could keep a Rockefeller waiting? In the book, he described her dress as yellow, but his memory may be faulty. The article describes it as pink and white, matching its appearance in colour photos taken that summer by Sam Shaw. 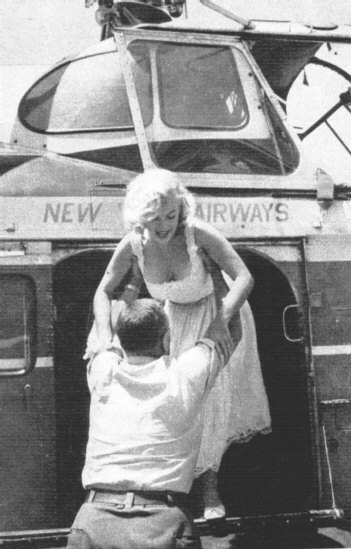 Another interesting point, for me, is that the article names Warren Fisher as Marilyn’s manager that day. According to Stacy Eubank, author of Holding a Good Thought for Marilyn, Fisher (or ‘Fischer’) was a press agent who also assisted Marilyn a few weeks later, when she suffered a miscarriage. In her memoir, Marilyn & Me, Susan Strasberg describes Fisher as ‘a secret friend she often met on Fridays for drinks at the St Regis Hotel.’

“Marilyn Monroe, a girl accustomed to standing out in a crowd, yesterday stood one up. And this crowd included a Rockefeller, who finally couldn’t stand it any longer. He waited for almost two hours and then left before Miss Monroe finally arrived.

The occasion was a ceremony at the site of the $70,000,000, 47-story Time & Life building now being built at 50th St. and Sixth Ave. Marilyn, a girl who sets off explosions wherever she walks, was supposed to set one off at the excavation by lighting a giant firecracker. The blast was planned to mark the reactivation of the old Rockefeller Center Sidewalk Superintendent’s Club.

The blow-up was scheduled for 11:30 AM. Laurance S. Rockefeller, a member of the board of directors of Rockefeller Center, was there in plenty of time. And so was Roy Larsen of Time Inc. But no Marilyn. When she did arrive, after a helicopter flight into the city from her vacation retreat in Amagansett, the blonde actress was more than two hours late.

About 500 ogling fans and 50 newsmen and photographers, climbed over each other for the most advantageous positions to photograph and to admire Miss Monroe’s charms. She smiled and two hours of sweat and swears were forgotten in an instance. The crowd loved it.

But Rockefeller, one of the late John D’s grandson, and Larsen were no longer around. After sweltering in the hot sun for almost two hours, they had announced politely at 1:15 PM that they wouldn’t wait any more.

The official left in charge, G. S. Eyssell, who later was overhead making a few irritated-sounding remarks to Miss Monroe’s manager, Warren Fisher, gave the actress a ‘warm welcome’ when her limousine rolled up to the scene. And the big blast finally went off.

The trip represented a vacation for Marilyn from her summer vacation in Amagansett. Her husband playwright Arthur Miller, stayed home to water the grass. Marilyn had arrived in New York in a nasty old helicopter that had made her airsick.

Lovely as a picture in a low-cut pink-and-white summer dress, the blond smiled and said, ‘Hi.’

Despite the brevity of her greeting, it was perfectly clear why gentlemen prefer blondes. She added that ‘it was a windy trip.'”