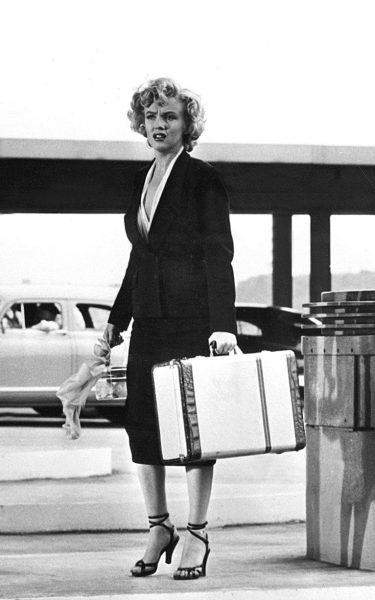 Although Marilyn had played leads before (most notably Don’t Bother to Knock), Niagara was her first true star vehicle. Writing for the Niagara Gazette, B.B. Singer looks back at the making of the movie, and the turbulent natural backdrop which seemed to mirror Marilyn’s tempestuous life.

“At the time she came to do location shots (June ‘52) for that movie, Monroe was already used to being hounded by paparazzi; but in a way, Niagara and her stay in this region was the last of her time before the complete onslaught of overwhelming stardom (followed, as the film was, by popular Monroe vehicles like How to Marry a Millionaire and The Seven Year Itch).

The girl first known in Southern California as Norma Jean had married very young to one Jim Dougherty, and it hadn’t lasted. Now as she labored in Niagara under Henry Hathaway’s patient, marvelous direction, she had a new boyfriend some around here still recall from his ball-playing heyday as ‘the Yankee Clipper.’

Newly retired, the celebrated Dimadge came up for some of the shooting, and he and Monroe got out to pretty Niagara County countryside to eat at restaurants like Schimschack’s. Monroe saw the requisite Falls sites, too, and no snob, got along well with extras, chambermaids, and the like.

However, the movie’s Niagara-like storminess would increasingly become her own, as the much-dissected relationship with DiMaggio became a marriage in 1954, one plagued by his silent fits, controlling jealousy (especially when she wore certain attire), and distrust of her friends, agents, fans, and not least, the paparazzi.

Niagara? A good film, and a luffing of sails for Monroe, granting her some transient happiness, that is, before her own personal craft began teetering (as happens to the film’s co-stars Joseph Cotten and Jean Peters) toward the mighty, remorseless cataracts!

Yes, in her case, eddying down toward a last cinematic enterprise beside an aging, doomed Gable, released in ‘61 and appropriately titled The Misfits. And then her tragic, early demise the very next year. Meanwhile, the pitiless Falls kept on tumbling, remaining the most enduring star.”