The Australian-born Orry Kelly, who won an Oscar for his costume designs in Some Like it Hot, is the subject of a new documentary. Directed by Gillian Armstrong, Women He’s Undressed will receive its premiere on a cruise ship at the Sydney Film Festival on June 10. Kelly’s previously unpublished memoir, Women I’ve Undressed, will be released on August 1, and an exhibition, Orry Kelly: Dressing Hollywood, will open at Melbourne’s Australian Centre for the Moving Image on August 18. 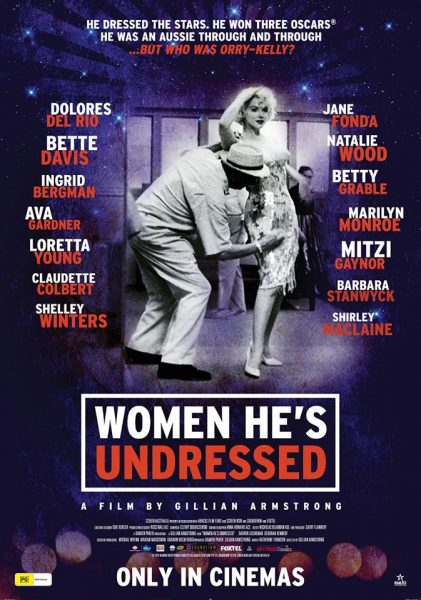 The Sydney Morning Herald published a fascinating article about Kelly’s career this weekend, in which Deborah Nadoolman Landis, who curated the recent Hollywood Costume exhibit, discusses his work with Marilyn.

“For Some Like it Hot in 1959, Orry-Kelly showed a different kind of artistry, creating clothes for cross-dressing musicians Tony Curtis (as Josephine) and Jack Lemmon (as Daphne) as well as the legendary Marilyn Monroe (Sugar Kane Kowalczyk), whose flaws, he once wrote, included short, stocky limbs. ‘Marilyn Monroe is someone who famously disliked underwear of any kind,’ says Landis. ‘Orry-Kelly was kind of a match made in heaven because he really understood, as any great costume designer does, a woman’s body and how to hold her up without anything underneath.’

Looking all the more voluptuous for being pregnant during filming, Monroe (who later lost the baby) wears two cocktail dresses – one in black and the other in nude, looking as deliciously sexy as humanly possible within the constraints of the censorious Motion Picture Production Code. Film critic Roger Ebert once observed that her beguiling star turn singing I Wanna Be Loved by You is a ‘striptease in which nudity would have been superfluous’.

‘There ain’t nothin’ underneath that dress; that dress is doing all the work,’ says Landis. ‘Really, that’s a master designer who is figuring out and working with a cutter-fitter and providing all the support that Monroe needed just by using the dress itself. And the dress is extremely witty.’

Cheekily, Orry-Kelly positioned a cut-out heart over the actress’s left buttock. ‘It’s right there in the middle of her tush,’ says Landis. ‘A red glass bugle-beaded heart. It’s the cutest thing you ever saw. This must have been some kind of joke between them, because nobody sees it in the movie.’

Landis believes the best costume designers have to be both diplomat and psychologist to work with vulnerable actors. ‘A costume designer gives the clothes to an actor, the actor gives the performance to the director and the director tells the story,’ she says. ‘It’s always a mistake to start forcing actors to wear something in which they don’t feel comfortable.'”