According to New Canaan News, the site of the former White Barn Theatre in Norwalk, Connecticut is being eyed by a housing development firm. The Save Cranbury Association opposes the plans to build on the two-acre site. ‘This is one of the last pieces of open space,’ said local resident Tim Hawks, whose house abuts the land. ‘I’m all about protecting it.’

As the above photo reveals, Marilyn visited the theatre (circa 1955) and signed its guestbook. Another rare photo, seemingly from the same visit, shows her with poet Norman Rosten, a close friend. 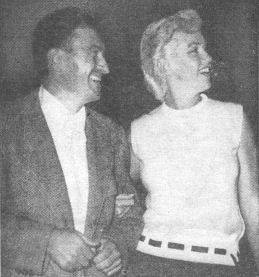 The White Barn Theatre was founded by actress, producer and impresario Lucille Lortel on the property of her estate. Numerous plays from major dramatists premiered there, including Rosten’s 1966 work, Come Slowly Eden. Eileen Heckart, Marilyn’s co-star in Bus Stop, performed there in Unfinished Business (1989.)