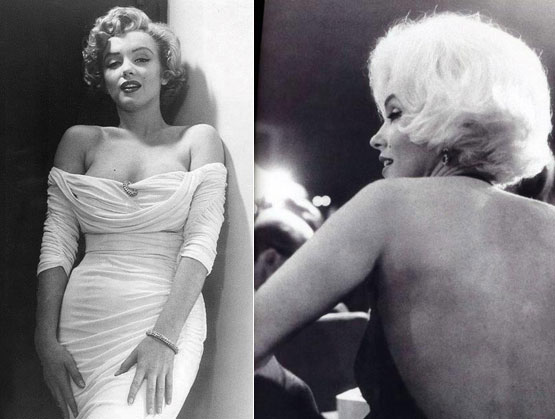 “This massive book covers the years 1956 to ’62 and beyond — into Monroe’s mythology, deification and after-death debasement.

As with the first volume, this works reminds me so much of the sane and excellent 1968 Fred Lawrence Guiles bio, Norma Jean. This, along with Maurice Zolotow’s colorfully brilliant 1960 book, Marilyn Monroe, are starting points for all things MM.

Vitacco-Robles presents his many facts without sensation or much agenda. Nothing is hidden, but what is revealed is not made to seem extraordinarily lurid. Monroe had deep-seated emotional problems, issues with prescription drugs and she liked her champagne a bit too much. Get in line, Hollywood and much of the rest of the world!

The book covers so much of Monroe’s life and in such detail it would be pointless to zero in on any particular chapter/era. Suffice to say the author uses only the best, most reliable sources. I would note, however, that his chapters on the controversial filming of Some Like It Hot and the examination of her death are especially interesting.

The Icon volumes are invaluable for anybody who wants to know about Monroe in a real sense — what her name and fame was during her lifetime. Now, 52 years after her death, she is written up and idolized as if she was still with us. But the image has been turned into something quite different.

Younger fans confuse what they see celebrated by today’s self-exploitative stardom and tell-all mentality. They don’t realize it has nothing to do with the system within which Marilyn both cooperated and battled. Pat Newcomb, Marilyn’s last press rep, once said, ‘Marilyn never told everything to anybody.’ Although Marilyn would be delighted by her enduring fame, she would be appalled by the invasions of her privacy — because so many of those invasions are total fiction.”