In an interview with the Toronto Star, 25 year-old British actress Juno Temple (Killer Joe, Maleficent) reveals that Marilyn is one of her idols.

“My room at home was covered in posters of Marilyn Monroe. She has been a huge inspiration for me. The thing that I find so absolutely bewitching about her was her beauty and animalism and sexuality … and this crazy innocent vulnerability and sometimes deep-rooted sadness on camera. And I’ve always loved her for that. And she was so funny.”

A new book and DVD set has just been published by Parragon (who also released another Marilyn title earlier this year.) This mixed media package is a reissue of their 2012 set, and while the cover is different, the content is the same. The book includes text by Marie Clayton which has been reissued in several different formats since its first appearance in 2003 (as Marilyn Monroe: Unseen Archives.)

Some earlier editions (without DVD)

Over at Buzzfeed today, there’s a helpful visual guide to some of the more persistent myths (including auction hoaxes and faked photos) about Marilyn’s alleged romance with President John F. Kennedy, and her performance of ‘Happy Birthday’ at Madison Square Garden in 1962.

“The so-called relationship between Marilyn and JFK has taken on a life of it’s own and has spawned a cottage industry of books, newspaper articles, rumours and conjecture. Contrary to what Google or Pinterest will tell you, there are only three photographs of Marilyn and JFK in the same room together. Any other photo purporting to be them is a FAKE.

Contrary to rumour Jackie Kennedy didn’t decide to stay away because of Marilyn’s presence. She didn’t care for these big political fundraisers and had always planned to be participating in a horse show elsewhere.

Rumour has it that Marilyn was drunk and her actions while performing were wildly out of control. Not true. It is also good to remember that this was a political fundraiser for the Democratic party. It wasn’t exactly an intimate dinner. Marilyn was one of many people performing at the fundraiser and she didn’t even close the night.

Marilyn Monroe is probably the most iconic movie actress in the world. She is also the most maligned. Not a month goes by without a lurid story being splashed across the tabloids and the internet. And everyone knows if it’s on the internet it must be true right? Wrong. With a little research (something biographers seem to be lacking) you can uncover the truth.”

In a new book, Miss Mizzou: A Life Beyond Comics, J.B. Winter explores how, back in 1952, a rising star called Marilyn Monroe was rumoured to have inspired cartoonist Milton Caniff to create Miss Mizzou, a trench-coated blonde bombshell, featured in his popular Steve Canyon adventure series about an Air Force pilot. She became a cult figure, and was even the subject of a lookalike contest, reports CAFNR News.

‘For some time I had been mulling over a girl character who would be what a Marilyn Monroe type might be like if she had not hit the jackpot in Hollywood,’ Caniff once said in an interview. ‘Every college town has girls who live and work on the edge of the campus and who are very much a part of the life of the school,’ Caniff is quoted as saying in a letter to the Missouri Alumnus magazine in 1954.” – Columbia Missourian

According to Wikipedia, the Marilyn connection was confirmed in the May 1953 issue of Pageant magazine, although it was actually actress Bek Nelson-Gordon (nee Stiner) who provided Caniff with a visual model. Another character, Madame Lynx, was based on Madame Egelichi, the spy played by Ilona Massey in the 1949 Marx Brothers swansong, Love Happy, which also featured MM – and Massey also posed for Caniff. ‘Pipper the Piper’, who appeared just once, was modelled on John F. Kennedy.

A cartoonist himself, Winter – who lives in Columbia, Missouri – talked about Miss Mizzou and her local connections in an interview with Move, student magazine of the University of Missouri (or ‘Mizzou’.)

“Winter said he seeks to prove that the Miss Mizzou character was not simply a ‘one-line footnote in local history.’ Though his nonfiction book originally arose from pure curiosity, his research, which included sifting through plenty of microfilm, soon became much bigger.

‘I found out about Miss Mizzou in 2007,’ Winter says. ‘There was a blog post on a comic historian’s website. He just posted a picture or two, not a lot of context. So, I was just like, What is this character? I thought it was just a character who appeared and that was it. I had no idea that there was all this campus interest. That continually surprised me.’

Dirk Burhans, a fellow cartoonist and creator of the Epiffany Jones comic strip, helped Winter with his book by reading early versions and making comments and suggestions. Burhans said he is also familiar with the importance of Caniff in the comic world.

‘Caniff was such a big deal,’ Burhans says. ‘Caniff’s Terry and the Pirates and Steve Canyon were the archetypal adventure strip that others used as their model. His artwork was characterized by simple lines and strong, confident use of light and shadow.’

Oddly enough, Caniff was not even a Columbia native; he lived mostly in New York City. Caniff only spent 24 hours in Columbia, to give a speech entitled ‘Comic Strips Are Serious Business.’

Those hours must have been serious business for Caniff, because three years later, Miss Mizzou made her seductive grand entrance, dressed only in a golden trench coat.

‘It’s such a strange story,’ Winter says. ‘Caniff only came here for 24 hours and for it to just be such a big thing, it’s just strange.’

Burhans also says Miss Mizzou gained popularity because she wasn’t like any other female comic character.

‘Caniff’s strips cycled through a number of sexy femme fatale characters who had the thick eyelashes and pouty lips. Miss Mizzou does not seem to be one of these, but rather was an ally of Steve Canyon’s,’ Burhans says.”

Marilyn graces the cover of US magazine Closer for the second time this year (the first came out back in June), with an article focusing on the mystery of her death. UK readers please note, the eponymous British magazine does not feature the same content. If you want to purchase this issue, try Ebay.

“Only in the new issue of Closer Weekly, Marilyn Monroe’s friends and family insist that Marilyn did not take her own life, while a new book, Marilyn Monroe: Day by Day, reveals new details from the star’s diary and the days leading up to her death.

Marilyn had made plans for ‘the day after she died…She was going to see the producers,’ Marilyn’s niece Mona Rae Miracle tells Closer. ‘It was very clear the studio was going to rehire her,’ notes Carl Rollyson, author of Marilyn Monroe: Day by Day, a new book that reveals the most comprehensive account of her last days through a paper trail of hidden diaries and appointment books. ‘She was making plans for the future.'”

Still, 50 years after her death, many believe it wasn’t suicide at all, but a tragic accident caused by the actress taking too many sleeping pills. ‘If Marilyn had a sleeping pill at her side, she would always take it,’ Jimmie Morrissey, Marilyn’s hairdresser, reveals to Closer. ‘She was always taking pills. And she was always drinking champagne.’

But the self-medicating couldn’t completely take away her pain. ‘She was in a bad place mentally for a while,’ Sherrill Snyder, the daughter of Marilyn’s longtime photographer and close friend Allan ‘Whitey’ Snyder, tells Closer. ‘People were giving her pills because they needed her to perform,’ she says. ‘Unfortunately, Marilyn was surrounded by people who were less than vigilant’ about tracking her medication. ‘One thing led to another, but my father never believed it was suicide.'”

After a year-long delay, Tom Kelley’s Studio has finally been published by Reel Art Press. It is a full retrospective of his career in glamour photography, with Marilyn on the cover.

Styling the Stars, a mammoth tome focusing on Twentieth Century-Fox, is also just released. This rare photo from the How to Marry a Millionaire set is captured here by Fraser Penney. 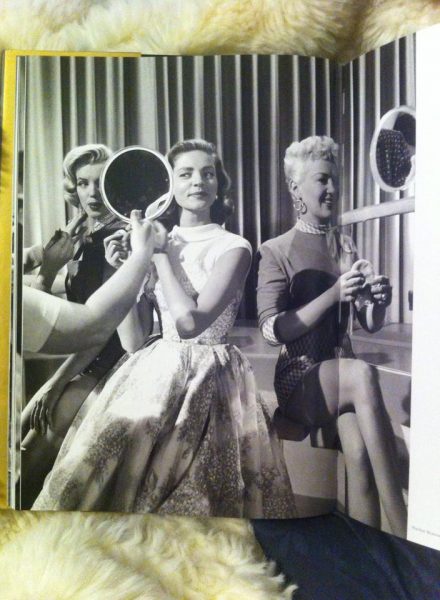 Oscar-winning actress Susan Sarandon will play Gladys Baker, Marilyn’s ill-fated mother, in Lifetime’s upcoming adaptation of J. Randy Taraborrelli’s The Secret Life of Marilyn Monroe, according to the Hollywood Reporter. It is set to be filmed in Ontario and Los Angeles, reported GlobalNews.ca earlier this week.

Taraborrelli focused heavily on Marilyn’s relationship with Gladys, although some of his claims have been disputed (more details here.) Gladys was previously played by Sheree North (in the 1980 TV movie, Marilyn: An Untold Story) and Patricia Richardson (in Blonde, the 2001 mini-series based on an eponymous novel by Joyce Carol Oates.) As Gladys was only 24 when Marilyn was born, I would hope that Sarandon – now 68 – will be playing her in later life.

Finally, there are two major errors in Secret Life‘s synopsis: firstly, Gladys’s mother did not commit suicide; and secondly, Marilyn’s first marriage did not end because she was frigid. She divorced her husband because he disapproved of her career.

“Sarandon will portray the blonde bombshell’s mentally ill mother, Gladys Mortenson. The character is described as a diagnosed paranoid schizophrenic, who is the product of a mother who committed suicide as a result of her own mental illness, and a father who died of syphilitic insanity. Frequently delusional, sometimes violent, Gladys sexually adventurous in her youth but taught her daughter that sex should be avoided at all costs. Deeply devoted to Christian Science, she urges Marilyn to reject her reliance on drugs and that her salvation will be achieved by returning to the tenets of the faith. (The role of Monroe has not yet been cast.)

24 and The Kennedys‘ Stephen Kronish is on board to pen the mini, with Sherrybaby‘s Laurie Collyer attached to direct the Marilyn Monroe entry.

Here’s Lifetime’s official description of the mini: ‘Marilyn is both the personification of sex, whose first marriage ironically collapses because of her frigidity, and a fragile artist who seeks the approval and protection of men.  But after tumultuous marriages with Joe DiMaggio and Arthur Miller, she realizes she has the strength to stand on her own. She becomes the face and voice of an era, yet wants most of all to be someone’s mother and someone’s little girl. She’s the Marilyn you haven’t seen before, the artist who, by masking the truth with an image, gives her greatest performance.'”

Photographer Nickolas Muray is the subject of a new retrospective, opening at the Doge’s Palace in Genoa, Italy, and on display until February 8, 2015. Born in Hungary, Muray was also known for his passionate affair with the great Mexican artist, Frida Kahlo. His Hollywood portraits feature Charlie Chaplin, Greta Garbo, Marlene Dietrich, Carole Lombard and a young Elizabeth Taylor. Famed for his work in Kodachrome, Muray photographed Marilyn in 1952, in a unique, Renaissance style.

Thanks to Eric and Tony at MM Fan Club Belgium

A catalogue for this exhibition can be ordered here 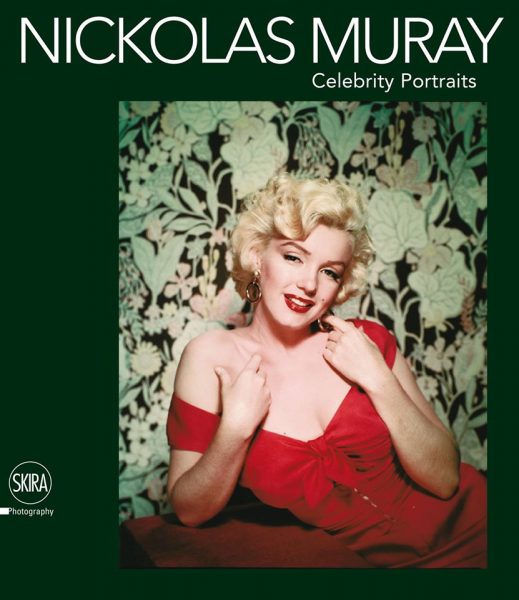 This pack of eight mini-posters, each measuring 12 x 16 inches, is now available from UK bargain bookstore The Works for just £4.99.