Over at the I Am Not a Stalker blog, a new post on one of Marilyn’s most mysterious addresses – an apartment building on 131 South Avon Street, Burbank, where she lived during the summer of 1947.

“I came across a Curbed post that mapped 43 properties where my girl Marilyn Monroe once lived…directly across the street from Warner Bros. Studio in Burbank…Prior to reading the Curbed post, I had no idea that Marilyn had ever called Burbank home.  According to the article, she lived in an apartment building at 131 South Avon Street for a very brief period during the summer of 1947 in what seemed to be some sort of house-sitting arrangement…Per Realtor.com (and several other websites), the 13,283-square-foot structure (which I believe is comprised of 13 units) was originally built in 1835 – 179 years ago.  Yeah, that seems a bit ridiculous to me, too.  My guess is that the 1835 date is a typo (that somehow got picked up by numerous sources) and that the building was actually constructed in 1935.

Because the building does look so new, I had originally wondered if Marilyn’s former domicile had been torn down at some point and a different edifice built in its place.  That does not appear to have been the case, though.  Pictured below is a 1972 aerial view of the property, as well as a current one.  As you can see, the structure of the building seems to be the same in both images.  Which means that Marilyn’s former home is actually still standing!  How incredibly cool is that?

The fake Fendi building from Sex and the City is located two doors south at 141 South Avon Street.” 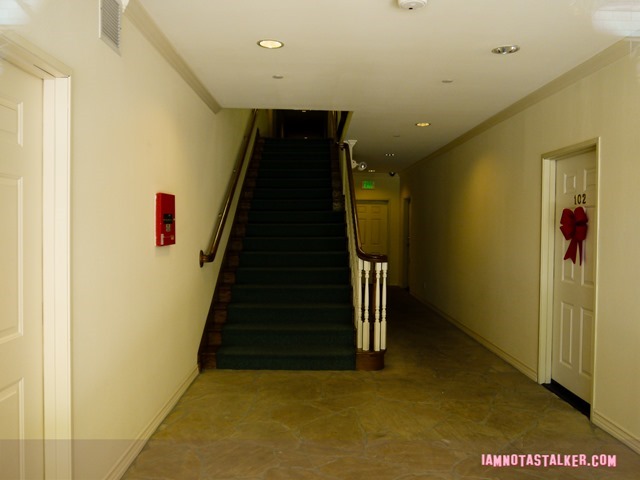 Marilyn was 21, and had just been dropped by Twentieth Century-Fox. Her new address was opposite Warner Brothers Studios, though she never worked there.

An odd story surrounds this period, concerning a stranger whom she had met in a bank one afternoon, while attempting to cash a paycheck from photographer Earl Moran. She arrived too late, and the man offered to lend her the money. Later that night, he climbed through her window at South Avon Street.

Marilyn chased him down the street in her nightdress, and called to her neighbours for help – but no one came. She reported the incident to the police, only to find that the man was, in fact, an off-duty policeman.

Earlier biographers thought Marilyn had imagined or lied about her ordeal, but this seems unlikely as it was mentioned in a local newspaper. Her agent, Harry Lipton, also contacted the police. As a hopeful actress, Marilyn would not have wanted that kind of publicity.

She told actor John Carroll about the break-in while serving as his caddy at a celebrity gold tournament that August. He and his wife, Lucille Ryman – a talent scout for MGM – insisted that she move in with them, and so Marilyn’s brief residency at South Avon Street came to an abrupt end.