In today’s Guardian, film critic Peter Bradshaw gives the reissued Some Like it Hot a rare five-star review, commenting, “‘Nobody’s perfect’ is the last line. Wilder, Lemmon, Curtis and Monroe come pretty close.” And Michael Newton devotes a feature to the classic comedy, headlined ‘Marilyn Monroe in Some Like It Hot … still smoking.’

“In Some Like It Hot, Monroe’s iconic position as all‑American sufferer is in play; as she sings ‘I’m Through With Love’, Sugar is despairing, but the shadowy hotel guests are dancing anyway, oblivious. Her persona contains a quality of beleaguered innocence, such that no one condemns her ‘gold-digging’, the plan being too fanciful, too unworldly to look sinister.

In a sense, Monroe is Some Like It Hot‘s third female impersonator. She enacts beauty as advertised. You might not want to be her, to adopt so strong a version of what the world imagined men would like. Yet her palpably fragile impersonation of the fantasy woman itself could act as an exposure of the fantasy’s essential unreality. For there was always something ostentatiously artificial about Monroe…Wilder wondered ‘whether Marilyn is a person at all or one of the greatest DuPont products ever invented.’ Often unnoticed on set, passed by on the street, Norma Jeane Mortenson could turn on being ‘Marilyn’ and in an instant claim everyone’s attention.

Playing an unregarded girl on the make, Monroe nevertheless fills the movie with the alluring shimmer of ‘the star’.”

Is Sugar coming to your town this weekend? Check here.

One of Marilyn’s edgier roles – as Rose Loomis in Niagara – will be screened at Film Forum, NYC, on July 22, as part of a Femmes Noir series. Writing for the Village Voice, Stephanie Zacharek takes another look at one of Marilyn’s most unsettling performances.

“This isn’t a Marilyn you want to embrace and protect. As Rose, she’s alert and defiant, a woman who has defined exactly what she wants and has forged a plan to help her get it. This performance, among the star’s finest, gives the lie to the idea that she couldn’t really act. What it suggests, instead, is that Marilyn was a natural: Her desire to be taken seriously as an actor, and her subsequent serious study of the craft, may have made her more self-conscious, constraining her gifts rather than opening a conduit for them. In Niagara, Marilyn’s Rose is self-determined, boldly sexual, almost impossibly cruel. And still, you feel for her: Mincing along in high-heeled sandals and a suit the color of a brazen afternoon sky, on the way to meet her lover — a wily operator who’s as slick as Cotten’s George is rumpled — Rose is everything that good girls have been taught not to be. But there’s also a gorgeous futility radiating from her soul: Sometimes there’s just no cure for the nagging malady of wanting something more.”

Some Like it Hot will be playing at selected UK cinemas from tomorrow. To celebrate its re-release, Helen Earnshaw looks back at some of Marilyn’s finest movie moments over at Female First.

“Some Like It Hot is widely regarded as one of the best American comedy movies as all time, and it really is a film that is as funny today as it was when it was first released…Monroe gives one of the best performances of her career as they delightful Sugar Kane, and she was more than a match for the comedic talents of Curtis and Lemmon.”

Is Sugar coming to your town this weekend? Check here.

Last month, ES Updates reported on the Polish auction of Milton Greene’s photos. Today, StandArt News reports that the archive will be the centrepiece of a new national museum of photography, opening in Wroclaw in 2016.

“On 25 June 2014, more than 3,000 celebrity photographs – many of Marilyn Monroe and some of them never before seen – were auctioned off at the Warsaw auction house DESA Unicum. A selection of the collection will be put on display as early as September in Wroclaw’s Unesco-inscribed Centennial Hall. Selections from the full collection will be the centrepiece of Poland’s first photography museum, set to open in Wroclaw in 2016, the same year that Wroclaw will be one of three European Capitals of Culture, BBC reports.

How these photographs came to wind up in Poland’s hands, never mind Wroclaw’s, is a story with as many twists and turns as Monroe’s life itself…

All parties had agreed with the culture minister of Poland, however, that any buyer had to keep the collection in Poland – and put it on public display.

At the end, just three bidders were on the short list – all of them all cities: Gdansk, Krakow and Wroclaw. Wroclaw, the fourth-largest city in Poland, won the photographs for 6.4 million zlotys, a record bid for any individual lot sold at a Polish auction.”

The latest pencil portrait of Marilyn by super-talented Ileana Hunter – after Bert Stern’s iconic 1962 photo – has just been unveiled on Etsy. The original is 11 x 16″, graphite on extra smooth Bristol board. Prints are available to order. 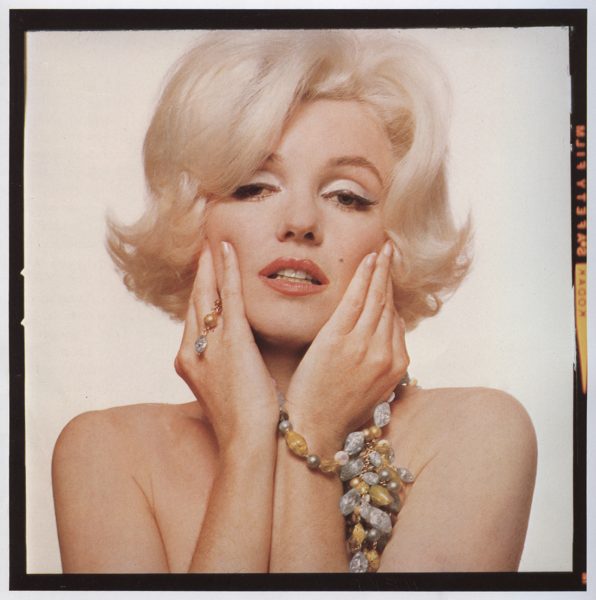 Back in 2012, I posted an extract from Follies of God: The Notebooks, a collection of unpublished writings by playwright Tennessee Williams. Entitled ‘Marilyn Monroe Got What She Wanted,’ the entry was quite cruel. I was disappointed that Williams, who wrote so well about troubled characters and was himself a deeply conflicted man, showed so little compassion for Marilyn.

I was pleased to discover another, more insightful piece by Williams, posted yesterday by editor James Grissom on the Follies of God blog. ‘On the Masks We Wear‘ looks at the gulf between outward appearance and the inner self, using Marilyn as an example.

“Marilyn [Monroe], to use one example, had a literal mask. A lot of people do. Their armor is beauty or strength. Hers was beauty–an almost supernal, lunar beauty. And it took hours–if not days–to create, to manufacture, to maintain. Creams and lotions and unguents and powders and sticks and colorful oils–and then you had Marilyn, the one we all wanted and felt we needed. And she had an identity. An identity of creamy skin and vulnerability. She could face the world with some degree of comfort.”

If you’re planning a trip to Los Angeles next month to pay your respects to Marilyn on the 52nd anniversary of her death, then be sure to check out the upcoming Marilyn’s Hollywood excursion from L.A. Woman Tours on August 2nd. Tickets available here.

Marilyn’s famous spoken line from ‘Diamonds Are a Girl’s Best Friend’ – Talk to me, Harry Winston, tell me all about it – was cited in a recent court judgement regarding the famous American jeweler’s brand name, reports IDEX Online.

“Harry Winston Inc. has won a long-running trademark dispute involving the son of the company’s founder over marks used to market gems and fine jewelry after an administrative panel ruled that using the son’s name, Bruce Winston, to promote rival goods would confuse customers.

The 71-page ruling is the latest decision in a battle over the Winston marks going back more than a decade. Bruce Winston filed an application to register his name as a trademark for use on jewelry in 2001, the year before his company was formed, according to the ruling.

The decision examines the history of Harry Winston and his jewelry store and analyzes the popularity of the company’s brand. In assessing the strength of the company’s marks, the TTAB described Winston as a ‘skilled promoter’ and said it was clear that the ‘Winston’ mark is ‘very well known in the jewelry industry.’

In support of its finding, the TTAB cited the song ‘Diamonds Are a Girl’s Best Friend’ which appeared in the 1953 film Gentlemen Prefer Blondes starring actress Marilyn Monroe. During the song, Monroe sings, ‘Talk to me, Harry Winston, tell me all about it,’ a line that the company has used in promotional material in the decades since the song was released, the ruling said.”

Marilyn has made the cover of Scotland’s Weekly News, with a two-page article inside focusing on her movies. If UK readers can’t find it in their newsagent, it can also be ordered via Newsstand – but hurry! 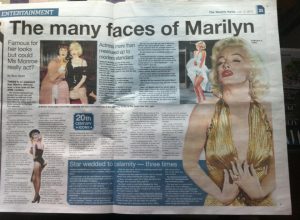 Marilyn is obviously a favourite at the Weekly News, as she last graced the cover in June 2013. A more recent issue featured Elvis Presley on the cover, so it’s a great choice for nostalgia fans. 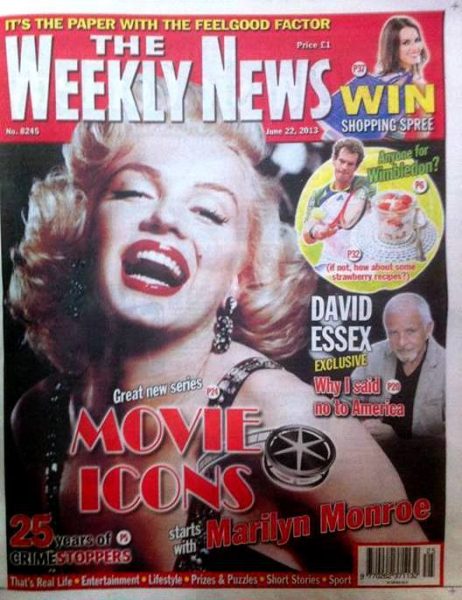 Some Like it Hot will be screened ‘under the stars’, outside the Everson Museum of Art in Syracuse, tonight at 8pm (preceded by an open house and pre-film festivities at 5pm.) As reported by Syracuse.com.