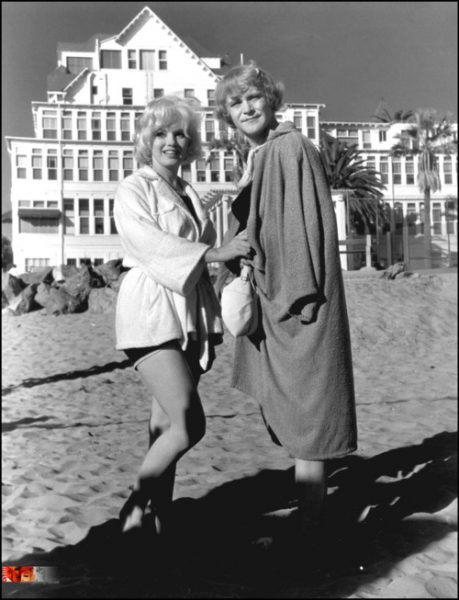 Jack Lemmon’s son, Chris, is currently starring in a one-man show, Jack Lemmon Returns, at the Laguna Playhouse. In an interview with the Hollywood Reporter, he shared his memories of growing up among the stars, including one decidedly fishy story about Marilyn and her alleged paramour, President John F. Kennedy:

“I was walking by Marilyn’s house. We used to live at Harold Lloyd’s old house, my mom rented it from him, and sure enough there’s this helicopter in a low lazy circle and these guys in funny suits and funny glasses standing around watching Marilyn Monroe and JFK having a frolic in the pool. I was six or seven years old and these guys went, ‘I think it’s time for you to leave,’ and they yanked me out of there.”

Chris Lemmon was born in June 1954, so this would place the story around 1960-61. Marilyn was filming in Hollywood at the time, but did not have a permanent residence. She returned to her home New York in October 1960, and did not move back to Los Angeles until summer of 1961. (John F. Kennedy was inaugurated as president in January of that year.) She then rented an apartment at North Doheny Drive, West Hollywood, for the rest of 1961. But she did not have a pool there, and according to her neighbours, lived very quietly.

In early 1962, Marilyn bought a modest bungalow in the middle-class suburb of Brentwood. She did have a pool there, but seldom used it. In any case, the pool was in the back garden, and could not be seen from outside. The house was located off the beaten track, in a quiet cul-de-sac. A high gate at the front of the bungalow ensured maximum privacy.

Chris Lemmon may be thinking of Peter Lawford’s much grander residence, which was indeed located in Santa Monica, right by the beach. Marilyn often visited the Lawfords there, from late 1961 until her death. And of course, Lawford was married to Patricia Kennedy. Her brothers, John and Robert Kennedy, also visited the house whenever they were in Los Angeles.

Marilyn met Jack and Bobby at the Lawford home on a handful of occasions. However, even if she had ‘canoodled’ with JFK there, it’s hard to believe that he would have drawn attention to the fact by having a helicopter flying ahead. And while she was a regular guest, it was never ‘Marilyn’s house.’

Would it be too cynical to suggest that he had few memories of his father’s erstwhile co-star (after all, Some Like it Hot was filmed when Chris was just four), and when pressed for an anecdote, drew on the well-worn gossip surrounding his former neighbours, the Lawfords?