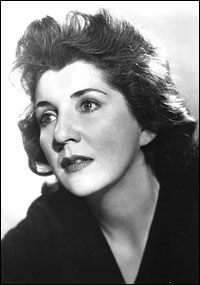 Born in 1925, Maureen Stapleton was an award-winning actress of stage and screen. An Actors Studio alumni, Maureen performed a scene from Eugene O’Neill’s Anna Christie, with Marilyn in the title role, before Lee Strasberg and an audience of fellow students in 1955. (Marilyn’s performance was praised by Strasberg, but typically she thought Maureen was better.)

Stapleton wrote warmly of MM in her 1995 memoir, A Hell of a Life. She died in 2006. James Grissom mentions both women on his Follies of God blog today, quoting from his 1991 interview with Maureen.

“I always felt protective toward her. I liked her. While I had no reason to feel sorry for her–she was beautiful and rich and loved–I did: I just knew that she was a magnet for shit, and I saw a lot of people unload on her. She was a child–a sweet, needy child, and I’m very Irish and very Catholic and basically a decent person, and I think you take care of children and needy people. I think you reach out to the sad people and the sick people, and I always felt that Marilyn was an inch and a half from deep sadness. If I made her comfortable–and she told me I did–it was because I wasn’t after her for anything but friendship, and I had a house full of noise and kids and open doors. She could let it hang with me, and I wish–like a lot of other people–that I had kept the doors open more often. She was a good person. She was not treated well.”