Writing for SautStar, Tony Ricciuto looks back at Marilyn’s stay in the General Brock Hotel (now the Crowne Plaza), while filming Niagara in the summer of 1952.

“It’s Room 801 inside the Crowne Plaza Hotel in Niagara Falls and if you play your cards right, you can sleep there, too.

It’s on the eighth floor, right at the end of the hall, on the left side.

‘It’s more than just the room, it’s the entire hotel because this is where she stayed when they were filming the movie Niagara,’ said Joseph Legace, general manager of the Crowne Plaza Hotel.

In June 1952, the hotel was called the General Brock, in honour of Sir Isaac Brock, the British major general who defended Canada from the Americans in the War of 1812.

‘We have taken actual photos of her when she was filming the movie and we have placed them on the eighth floor for all our guests to see,’ said Legace.

When the 20th Century Fox film Niagara was shot in Niagara Falls, Monroe, Joseph Cotten and Jean Peters all stayed at the Brock.

‘We are actually going to be doing historical tours of the hotel,’ said Legace.

The hotel was built in 1929. It’s directly across the street from the Rainbow Bridge and it’s the first building American visitors may see after crossing into Canada. The hotel has changed names over the years, and while there have been a number of renovations, the eighth floor and Room 801 will always be a part of Marilyn Monroe history.

‘We get guests all the time asking where did Marilyn sleep or what was her room number. We advise them to take a look on the eighth floor, there are five special pictures that were shot of her when she was here,’ said Legace. ‘They are quite unique and they have a little caption under them. A new picture was just sent to me recently and it shows Marilyn on our balcony.’ 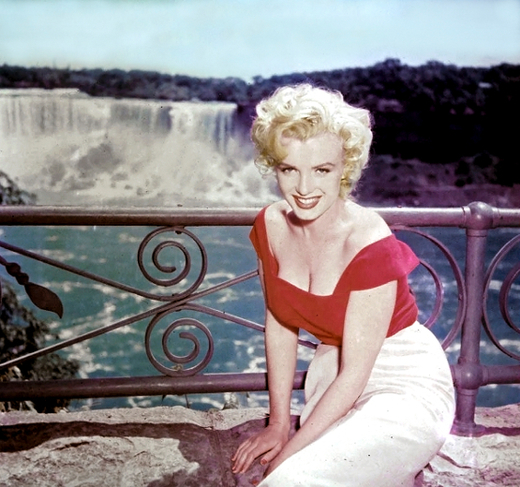 According to local folklore, Marilyn was known to walk around naked or sleep in the nude.

Opening the door to Room 801, it’s smaller than expected. On the left there’s a bathroom. There are two double beds in the room and there’s a large framed black and white photograph of Marilyn that was taken at the Maid of the Mist. It was signed and dated by the photographer.

This is the bedroom of the suite where Marilyn stayed. It would have been much larger in 1952 and the view from the window showing the American Falls would have been more spectacular. Now, part of that view is blocked by new construction that has gone up around the hotel.”

Photos from the ‘Marilyn Suite’ were posted by a member of Everlasting Star forum in 2011. You can view them here.

Several months ago, ES Updates reported on ‘Marilyn’s Blue Book Days‘, a new book and documentary project. Filmmaker Suzanne van Leendert and Astrid Franse, owner of the Blue Book Modeling Agency archive, are visiting Los Angeles to shoot footage and will also be appearing at the next meeting of the L.A.-based Marilyn Remembered Fan Club tomorrow, March 8 at 7.30 pm, where they will share rare photos from Emmeline Sniveley’s files. More details here. 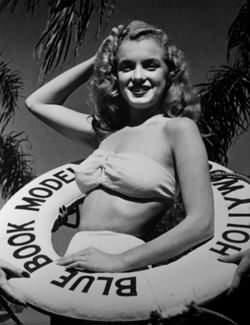 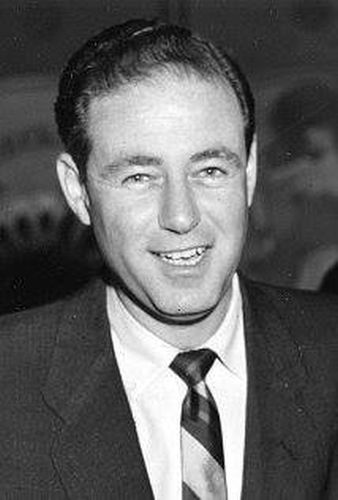 Stanley Rubin – the producer of River of No Return, who along with his actress wife, Kathleen Hughes, was a regular guest at Marilyn’s annual memorial services – died on Sunday, March 2, aged 96, reports the L.A. Times.

Born in the Bronx in 1917, Stanley took a Greyhound bus to Los Angeles in 1933. Though he would not complete his degree at UCLA, he quickly made his mark on Hollywood.

By 1940, Rubin was a screenwriter at Universal, and became one of the first to win an Emmy in 1949. He wrote scripts for 19 films, and produced over two dozen feature and TV films. His personal favourite, The Narrow Margin (1952) was shot in 13 days and became a classic film noir. Rubin had refused to obey RKO head Howard Hughes’ demand that he re-shoot it with an all-star cast.

Stanley first met Marilyn Monroe in 1948, when she auditioned for a TV series. Although impressed by her, the producer decided that she was too inexperienced for the role.

By 1953, Marilyn was one of Hollywood’s biggest stars. Rubin met her again when Twentieth Century-Fox asked him to produce a new Western, River of No Return.

Director Otto Preminger was not Rubin’s first choice, and Marilyn soon became unhappy with his tyrannical ways. However, Rubin told Michelle Morgan (author of MM: Private and Undisclosed) that Marilyn’s leg injury, incurred while filming on location, was genuine and not staged.

A year later, Rubin married Kathleen Hughes, best-known for her role in the sci-fi classic, It Came From Outer Space (1953.) They had four children together.

Rubin’s final screen credit was in 1990, as co-producer for Clint Eastwood’s White Hunter, Black Heart. In recent years, he resumed his studies at UCLA, and was the subject of a 2008 documentary, Stanley Rubin: A Work in Progress.

‘Marilyn Monroe lived in this apartment – now it’s your turn!’ promises a new classified ad posted on Craigslist, offering an apartment in a ‘Romanesque villa’ for rent at $3,500 per month. The address is 1309 North Harper Avenue.

Writing for the L.A. Curbed website, Pauline O’Connor notes that during her starlet years, Marilyn often stayed at the home of her dramatic coach, Natasha Lytess, on North Harper Avenue, West Hollywood. She also spent a great deal of time with the Karger family, who were Natasha’s neighbours.

However, while the location is undoubtedly of historic interest, the reality is complicated. For clarity’s sake, it should be noted that while Marilyn was a frequent guest, and at times an informal resident, she never ‘officially’ became a tenant.

In the 2004 book, Hometown Girl, Eric Woodard states that Marilyn first stayed with Natasha at a Harper Avenue address in 1948, around the time of her short-lived relationship with Fred Karger. She remained close to his mother, Anne, and sister Mary after the affair ended.

Then in 1950, Natasha moved to a smaller apartment on Harper Avenue. Marilyn stayed with her again following Johnny Hyde’s death in December that year.

Now available on DVD, Hollywood: The Fabulous Era is a 1960s documentary presented by Henry Fonda, and featuring Marilyn among other legendary stars. Another reissued documentary, Hollywood Without Make Up, also includes footage of MM.

Thanks to Fraser and Lorraine

If you’ve visited Marilyn’s crypt and had your photo taken there, you may be interested in participating in ‘Marilyn Monroe and Me’, a new online art exhibit, curated by MM collector and historian, Scott Fortner. More details at the MM Collection Blog.

Our condolences to the family of William ‘Bill’ Carroll, one of the first professionals to photograph Marilyn, who died on January 27th. His obituary can be read at Legacy.com; and for information on his work with Norma Jeane, please visit Cursum Perficio, or read this 2010 interview with L.A. Weekly.

While Marilyn never won an Oscar (she’s pictured here accepting a Golden Globe in 1962), her films are among the most enduringly popular of all time, and this is largely due to her presence in them. Over at Wall St Cheat Sheet this weekend, Jacqueline Sahagian nominates MM’s 6 greatest performances; while on IndieWire, Bethany Jones cites Marilyn’s pairing with Jane Russell in Gentlemen Prefer Blondes in a list of 6 Onscreen Duos Who Should Have Been Queer.

I find this hard to believe, not least because it was near-impossible to secretly film people using camera equipment available during the early 1960s. And why on earth would the president and his brother have consented to be filmed in such a compromising situation?

“The steamy, never-before-seen reel — said to have been shot on 8 mm film — will be auctioned by the Tulare County Sheriff in California which has seized the property as part of a lawsuit involving the man, William Castleberry.

Castleberry exclusively told RadarOnline.com: ‘It’s real. I had it for years and I never released it out of respect for Joe DiMaggio… I’m just sick about it and I’m desperately trying to raise money to get it back.’

Castleberry, a 56-year-old memorabilia collector, would not detail how he obtained the alleged recording or what it depicts.

He had been making payments to satisfy the debt, but according to Castleberry, lawyers demanded a balloon payment that he simply couldn’t afford to pay.

‘They demanded a $90,000 payment I couldn’t afford and that is when the sheriff came in and seized the sex tape and all of my other memorabilia I have been collecting my entire life,’ he said.

‘I was told several years ago that Mr. Castleberry had a sex tape of Marilyn Monroe, JFK & RFK,’ said attorney Ryan Sullivan, who is representing the plaintiffs in the case against Castleberry.

But, cautioned the lawyer: ‘I have no idea what is on the tape, it could be what Mr. Castleberry says, or it could be a Disney cartoon. The only way anyone will ever know is if they buy it and view it. The entire lot will go up for auction on Tuesday and the minimum bid will be $200,000.’

‘Mr. Castleberry has until Tuesday morning before the lot goes up for auction to get his stuff back,’ Sullivan said. ‘He would have to pay over $200,000 to satisfy the judgement. If he fails to do so, the auction will proceed.’

If he does secure the apparent prized possession, Castleberry said he plans on ‘releasing it all to the world.’

He told Radar, ‘I had hoped to give it all to a museum, or even open one myself. If I don’t get it back, well, okay. It’s just stuff and I can start over. My wife is extremely sick and when I go to heaven someday, I’m not taking a U-haul full of stuff with me.’”

UPDATE: The auction has been cancelled after Mr Castleberry settled his $200,000 debt, reports TMZ. Publicity stunt, anyone?