Over at the Telegraph, Tim Wong pays tribute to Sam Shaw. Born 102 years ago today – on January 15th, 1912 – Shaw’s photographs of Marilyn have been making headlines again, with the recent publication of a ‘lost scrapbook’ by Newsweek.

“His first assignment as an on-set photographer was in 1950 – It was Elia Kazan’s Panic in the Streets. He went on to photograph Brando in Viva Zapata! (also a Kazan). Because Sam Shaw didn’t drive, Kazan found a young out-of-work actress to drive him around the studio. And that actress was Marilyn Monroe.

Between 1954 and 1957, after Marilyn became a superstar, Shaw took a series of pictures that shows her both in on-set and in off duty moments as herself. Pictures of her squeezing tomato sauce on a hotdog in a diner or putting makeup on are poignant documentation of a young woman who had an uneasy relationship with her celebrity.

The picture below of Monroe, entitled The Proposal, has a charming story behind it. Shaw and Monroe were strolling through Central Park. Marilyn was at the time learning improvisation techniques through the Actor’s Studio. So he challenged her to demonstrate improvisation there and then. Marilyn, not missing a beat, grabbed a newspaper and parked herself on a nearby bench, where a couple are having an intimate and absorbed conversation. Overheard by Marilyn, the man was in fact proposing to the girl, oblivious to the megastar sitting right next to him. Marilyn played up to it by appearing completely relaxed and nonchalant. A wonderful picture filled with humour and playfulness.”

If you’re wondering why you’ve never seen this magazine cover before, that’s because it was never published. In fact, it’s one of several mock-ups featured in The Secret Life of Walter Mitty, the latest big-screen adaptation of James Thurber’s classic short story, starring Ben Stiller as the hapless daydreamer. You can view a selection of fantasy Life covers here.

Pictured below: Marilyn with Danny Kaye, who first played Mitty in 1947; and a selection of actual Life covers (the one in the middle is a special tribute issue from 2009, reviewed here.)

Marilyn married Joe DiMaggio at City Hall in San Francisco on January 14, 1954. I have posted an extract from my novel, The Mmm Girl, on my personal website today, describing the wedding. For a factual account of their romance, your best bet would be Susan Doll’s online biography, beginning here.

Actor Al Breneman – best-known for his role as the frisky young bellhop in Some Like it Hot – will be a special guest at the next meeting of the Marilyn Remembered fan club, in Los Angeles on February 1st.

Over at Pretty Clever Films today, an interesting look back at director Billy Wilder’s tussles with the Production Code:

“Most of Wilder’s film topics were more risqué than other movies of the time. Take The Seven Year Itch (1955) for example, a film about temptation and marital infidelity. Richard’s (Tom Ewell) family is out of town for the summer, and a gorgeous blonde bombshell (Marilyn Monroe) moves in upstairs. They strike up a friendship, and it’s clear he’s attracted. The specter of adultery rears its ugly head, but since much of the film is told through Richard’s fantasies – not actual infidelity – and is resolved with him joining his wife and family on holiday, Wilder’s suggestive and titillating film fully complies with the Production Code.

In Wilder’s slapstick comedy Some Like it Hot (1959) Jack Lemmon and Tony Curtis play down and out Chicago musicians. On the run from gangsters, they dress up in drag to join an all-female band on tour. Both enamoured of the band’s lead singer (Marilyn Monroe), the two men compete for her affections. Hijinks ensue.

By the late 1950s, many directors were getting more daring, and audiences were looking for a loosening of the Code’s standards. Wilder’s Some Like it Hot (1959) was an enormous popular and critical success, but received a ‘Condemned’ rating from the National Legion of Decency. It was released anyway, without Code approval, and its success helped spur on the eventual demise of the Code in 1968.”

However, it seems that Marilyn may have thought the director wasn’t daring enough. In a 1961 interview with W.J. Weatherby, author of Conversations With Marilyn, she said of Wilder, ‘He’s a brilliant moviemaker, but he worries too much about the box office.’

Two of Marilyn’s movies will be screened at this year’s Humphrey Bogart Film Festival, from May 1-4 in Key Largo, Florida: How to Marry a Millionaire, co-starring Bogart’s wife, Lauren Bacall; and that perennial crowd-pleaser, Some Like it Hot.

“White got a hold of one of the last remaining large-format 20×24 Polaroid cameras and turned it on herself. Displaying 24 massive nude self-portraits lit in red, white, and blue, White appears nude, sometimes double exposed against herself, on a black field, both elegant and sinister. Next to highly contrasting photos of Monroe—under pink gauze and in an overexposed white field—they carry a tragic significance that borrows from the lore of Monroe.

The photos of the actress are from a collection of the last moments of the star’s life. Taken by Bert Stern just six weeks before her death, the photos relay a tragic figure touched by something of an insatiable desire to be nothing but seen.

To focus the notion of muse on an individual is characteristic of something tragic: Greece, any single other person’s fallibility, why literally anything can be the font of art. It’s not necessary—or always possible—to be so focused on one human as a source of creation. But Natalie versus Marilyn talks more about narrative on a continuum than it does any single source. We’re always searching for a new muse.”

Princess Tenko is ‘a Japanese pop singer turned magician specialising in grand illusions’ (according to her Wikipedia page.) A new documentary, Unclaimed Baggage, focuses on a Louis Vuitton trunk she bought at auction, which supposedly belonged to Marilyn.

The story is that the trunk was sent by the Vanderbilts, whom Marilyn met on her trip to Mexico in 1962. Born into one of America’s richest families, Fred Vanderbilt-Field was an expatriate who had embraced communism. (Ironically, there are few more potent symbols of capitalism than a Louis Vuitton trunk.)

The Vanderbilts stayed at Marilyn’s New York apartment in the spring of 1962, while she was filming Something’s Got to Give in Hollywood. After they left, Marilyn received a reprimand from the owners of her apartment building – probably because of her guests’ left-wing affiliations.

Until Princess Tenko’s purchase in 2005, it’s said that the trunk languished in a New York warehouse. After performing at President Kennedy’s birthday gala in May, Marilyn returned to Los Angeles where she died in August. If the trunk was a gift, it’s possible that she never had the chance to accept it.

Personally, I’m not convinced that this trunk really belonged to Marilyn. However, the emotional response of people to items connected with MM intrigues me, and the vast sums of money some are willing to pay – whether or not they are genuine. Maybe that is the real point of this documentary, which features appearances by Greg Schreiner (president of Marilyn Remembered), and authors Lois Banner and John Gilmore, among others.

Unclaimed Baggage will be shown on French television next week (France 1, 16th January at 21.35.) You can read more about it (and view trailers) over at Messy Nessy Chic.

The German Dada artist, Hannah Höch, is the subject of a retrospective exhibition at London’s Whitechapel Gallery (on display from January 15th – March 23rd.) One of her late photo-montages, ‘Kleine Sonne’ (‘Little Sun’, 1969) depicts the grinning mouth of Marilyn Monroe hovering beside a fish’s eye.

Her source may have been Richard Avedon‘s 1959 photo of Marilyn which graced the cover of Life magazine. You can read more about Hannah Höch in today’s Guardian. 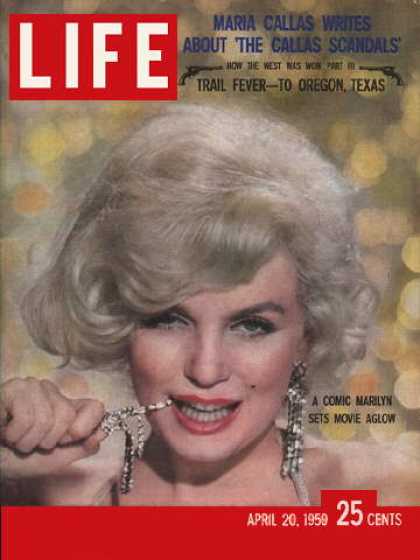