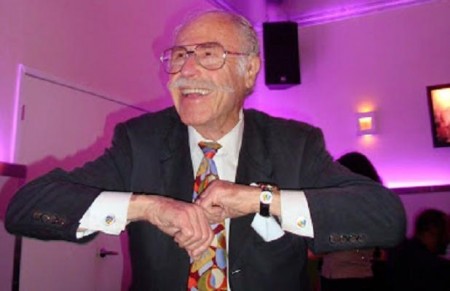 “He started off as nearly  a charter member of USC’s Film School in 1937 and then worked in Columbia’s story department , but it was landing his job  in the Fox publicity department in 1949 that really got things cooking for him. That was about the same time as Fox’s most famous star, Marilyn Monroe also started. Julian would often tell me about those days when he would have to go try to get the famously difficult actress out of bed and on to the set. He wasn’t her publicist as some outlets wrongly said in their headlines today, he was a loyal studio publicist – or more accurately press agent – who had 20th’s back in those days. One of his earliest encounters with her was in 1950 when she had a small role in the iconic Fox Oscar winner, All About Eve. In pure ‘press agent’ fashion he even got  the Hollywood Roosevelt Hotel to block  out all the letters in its neon sign except ‘EVE’ when the film had its premiere across the street at Grauman’s Chinese.”

Marilyn does not seem to have attended the premiere, captured on newsreel from November 13, 1950. However, she did later present an Oscar to Thomas H. Moulton for Best Sound Recording on the film.

Julian Myers worked at Fox until 1961. In 2013, Myers shared his memories of Marilyn in a TV interview. He recalled accompanying her to visit troops at San Pedro. (He may be referring to her visiting the USS Benham in 1951, or Camp Pendleton in 1952.)

En route, they stopped at a gas station where Marilyn spent 45 minutes in the powder room. Despite her tardiness, the troops loved her.

Myers remembered Marilyn as an insecure young woman who never thought of herself as a sex symbol. “I was the only guy trying to get her out of bed,” he joked, noting that he “was a happily married man.”