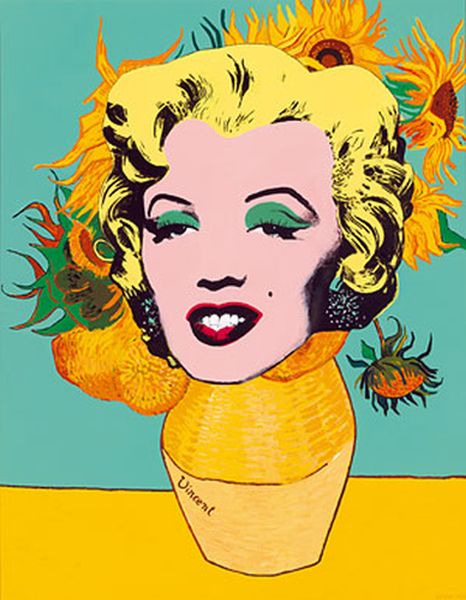 Martin Sharp, the Australian pop artist famed for his psychedelic portrait of Bob Dylan, first published on the cover of counter-cultural magazine Oz in 1967 and later an ubiquitous student poster, has died, reports the New York Times.

In 1973, Sharp painted Still Life: Marilyn, a surrealist work that channels both Andy Warhol and Vincent Van Gogh, as explained on the National Gallery of Australia website:

“The painting that Sharp did with artist Tim Lewis, Still life: Marilyn 1973, pays homage to both Warhol and Marilyn Monroe. In the months that followed Monroe’s death in August 1962, Warhol made more than twenty silkscreen paintings of her, combining two of his consistent preoccupations: death and the cult of celebrity. Sharp initially made a collage of the still life by pasting Warhol’s image of Monroe from a Tate Gallery poster onto a print of the much-reproduced Sunflowers by Van Gogh.

‘This collage was only possible to me at the time because Marilyn’s green eyeshadow was the same green as the background of the sunflowers. There was also an echo of Marilyn’s life and Vincent’s. They were both great artists, they died at a similar age and one could describe Marilyn as a sunflower. I called the painting Still life, because though they had left this world they were still alive in their art and influence …2‘

Although the painting Still life: Marilyn was done later than the collage, the idea had come about while Sharp was living in London. Like many young Australian artists, he was drawn to the the swinging sixties in London where he lived from 1967 to 1969.”