Dale Corvino‘s delightful reminiscence of Marilyn’s little-known connection to his mother’s family, the Rizzos – neighbours of the DiMaggios in San Francisco – is published in full at Salon today.

“‘Marilyn Monroe was my mother’s baby sitter,’ I used to tell the neighborhood kids, whenever our rambunctious play took us inside the house. The girls went open-mouthed with wonder and admiration. The boys were skeptical, even scornful: ‘Movie stars don’t baby-sit!’

But then I’d point to the photo-booth image hanging in the vestibule of my childhood home…In the photo, my mother holds a pursed smile while looking right into the camera. A mass of dark curls surrounds her face as she upstages Marilyn in a way no studio executive would allow. Cousin Laraine is caught unawares by the flash; she looks out of frame with a half-smile. Marilyn is grinning candidly — not the practiced smile she’ll use for thousands of subsequent photos…

The DiMaggios were also Sicilian; Guiseppe, the patriarch, had fished Mediterranean waters, and relocated to the Pacific coast in pursuit of a bigger catch. His haul out of San Francisco bay was bountiful, and he went on to raise nine children. To his initial disappointment, three of his sons turned their backs on the family trade to become baseball players. Joe was the real power slugger, having gone on to a record-breaking hitting streak with the Yankees. Around the time the DiMaggios befriended my grandparents, Joe began courting Marilyn Monroe. 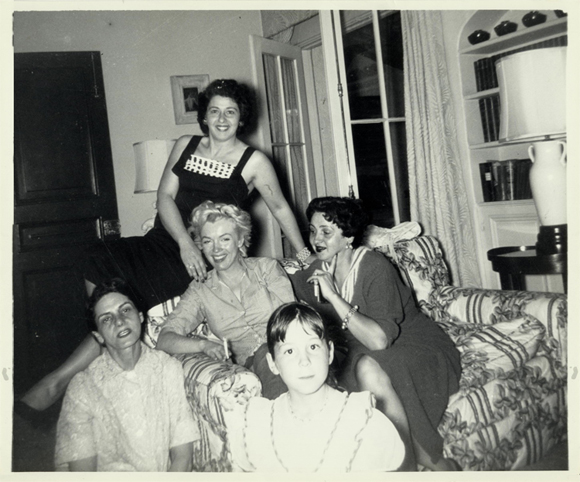 Joe brought Marilyn around on visits to get to know his family. During one visit in late 1953, two pictures were taken: In one of them, Marilyn and my grandmother Helen are seated on the couch. Helen gives Marilyn an affectionate hug, and Marilyn is smiling warmly. In the second shot, Helen stands behind Marilyn with a protective hand poised lightly on her shoulder, while my Great Aunt Rose, Helen’s older sister, looms and fawns over Marilyn like a hungry vulture; Marilyn has notably shifted her body away. When Great Aunt Rose heard that Marilyn was spending the weekend, she bought a ticket from New York to San Francisco, and tagged along uninvited.  On the back of the photo, Helen wrote: ‘Marilyn had a rash on her face at the time and didn’t want to be photographed, but Rose insisted. Marilyn agreed as long as it was black & white.’

…My mother isn’t in either of those photos, but she was around that day with her cousin and playmate Laraine, and the presence of these two playful little girls warmed Marilyn’s heart; she longed for children of her own. She took to the girls instantly and showed them great affection.

One day, Marilyn offered to take them to Playland. Laraine’s mother, consumed with a newborn, thought it would be good to get the girls out of the house. The trio took off to the amusement park, with Marilyn driving the short distance in her Pontiac convertible…The girls both liked the pretty blond lady who was taking them to Playland, but the main attraction was the Ferris wheel. It would be their first visit to the park…

The trio first found a photo booth, and posed for the picture that hung in the vestibule. Grandma Helen wrote on the back: ‘This is a 25¢ picture taken at Playland. She wanted to go on the rides with your mother & cousin Laraine. A sailor recognized her & she took a picture with him and it got around & the police were called. It was frightening.’ A brisk wind blew Marilyn’s headscarf off her signature platinum bob, giving that sailor a jolt of recognition. My mother vividly recalls the only ride they got that day — rushed through the throng out of the park on the shoulders of San Francisco policemen.”