Making The Fall is a new book by Richard D. Meyer, who worked closely with Arthur Miller and Elia Kazan on their 1964 production of Miller’s controversial play, After the Fall – which many felt was based on Miller’s troubled marriage to Marilyn. (Shar Daws wrote an excellent essay on the play, which you can read at Loving Marilyn.) 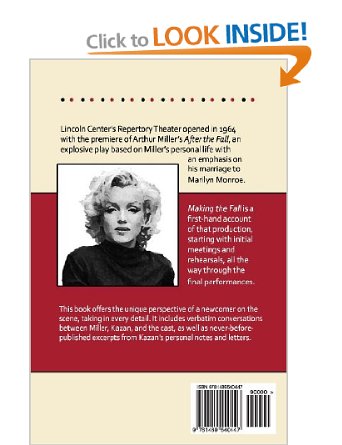 The blurb for Making The Fall goes like this:

“An intimate account of Elia Kazan and Arthur Miller working together on After the Fall, Miller’s autobiographical play about Marilyn Monroe.

Lincoln Center’s Repertory Theater opened in 1964 with the premiere of Arthur Miller’s After the Fall, an explosive play about Miller’s personal life with an emphasis on his marriage to Marilyn Monroe.

Richard D. Meyer’s book, Making the Fall, is a first-hand account of that production, starting with initial meetings and rehearsals, all the way through the final performances.

The book offers the unique perspective of a newcomer on the scene, taking in every detail. It includes verbatim conversations between Miller, Kazan, and the cast, as well as excerpts from Kazan’s personal notes and letters.

As a director and theater scholar, Meyer delves into the play’s deeper theme, how it reflects the lives of those involved (and represented) in the play, and its impact on the American public.

Making the Fall is an in-depth, up-personal account of a historical year in American theater. It will appeal not only to theater buffs but to anyone interested in the complex tangle of relationships between Arthur Miller, Marilyn Monroe, and Elia Kazan.”