A selection of US reviews for Love, Marilyn, which was screened on HBO on Monday.

“There’s a certain genius to the concept behind Liz Garbus’ documentary … the film itself is kind of a mess, albeit a mess you can’t stop watching because, after all, it’s Marilyn.

The brilliance of the concept, which is not unlike the approach that Todd Haynes took on the life of Bob Dylan in I’m Not There, has to do with Monroe the performer. Pop a camera in her face, and she became a different entity.

The written material itself is fascinating, of course. There may not be any bombshell revelations here, but we get more of a sense of her trying to be authentic as she writes poetry, lists her goals in life and work, and records information about lesser-known Italian Renaissance painters she is studying. It’s not coincidental that the writing becomes more worked-over the deeper she gets into psychoanalysis and dependence on prescription medication, reflecting her growing struggle to know what being authentic really meant.

Garbus was painted into a corner on this project from the beginning: You simply can’t do anything on Marilyn Monroe, even readings of recently unearthed writing, without slamming into the mythology. But having all these actors trying to be Monroe is at times very confusing and even, at times, silly. At those moments, we’re not reminded of the often fragile co-existence of the movie star and the yearning product of many foster homes in the same body but, rather, of the transparency of having other people speak her words.

Of course, the idea behind Love, Marilyn is to reinforce the obvious, that Marilyn Monroe cannot speak for herself. Fortunately, her written words are not entirely drowned out by the artificiality of the film’s concept. The words are hers, and that counts for something.” – David Wiegand, Houston Chronicle

“I confess:  Whenever I want a pick me up or a reason to smile I’ll reach not for a bottle of gin but a Blu-ray of Marilyn Monroe singing … With her exaggerated diction, delicious double takes, deftly disarming sweetness and that smile, that brilliant lovely, life embracing happy smile, that construct ‘Marilyn Monroe’ which she dreamed up and created as surely as Charlie Chaplin created the Little Tramp has become an enduring archetype.

Love, Marilyn doesn’t try to demystify Monroe much less ‘explain’ her but lets her own voice be the dominant teller of her story.  It’s a remarkable, enchanting and, yes, sad movie.” Stephen Schaefer, Boston Herald

“Watching Love, Marilyn, Liz Garbus’ pointed, poetic and occasionally overwrought documentary about the life of Marilyn Monroe, I kept thinking about The Great Gatsby, another tragedy in two acts recently resurrected for our viewing pleasure.

Yet for all the hope pinned on internal illumination, the first thing Love, Marilyn does is remind us how beautiful Monroe really was. Her face has been so thoroughly replaced in popular culture by commercialized replications that the real thing is a surprising thrill to behold.

For fans, there is not much new information here; it’s all in the presentation. Garbus is clearly entranced with her subject, presenting Monroe as both a strong-willed pioneer and a confused victim.” Mary McNamara, Los Angeles Times

“Directed by Liz Garbus, whose previous films include the critical hit Bobby Fischer Against the World (2011), Love, Marilyn is a diverting, at times incisive, yet flawed biography that tries to accomplish two almost contradictory goals: to outline the contours of the Monroe myth and capture some truth about Monroe as a unique individual.

In a nice if at times overbearing gimmick, Garbus approaches her subject by having actors read from a recently discovered cache of journals, letters, and poems written in Monroe’s childlike scrawl.

What’s interesting about Monroe is how she lives on as a myth, in both senses of the word. In one sense, myths sustain the culture. Like the Horatio Alger story, the Monroe myth has become one of those narratives every community needs as a guidepost to its collective identity, its purpose and direction.

The star carefully, actively cultivated her status as a sex symbol, becoming in effect the first modern self-manufactured celebrity commodity. That was also her undoing: The sole purpose of a commodity is to be used up.” – Tirdad Derakshani, Philly.com

The novelist Carson McCullers became friendly with Marilyn in 1955, while they were both living at New York’s Gladstone Hotel. Four years later, they were reunited for a literary luncheon with Marilyn’s husband, Arthur Miller, and the Danish author, Isak Dinesen.

Carson’s final novel, Clock Without Hands, was published in 1961. Like most of her work, it is set in her native South. Even more than her earlier books, Clock Without Hands deals with racism and bigotry, at a time when America’s Civil Rights movement was gaining momentum.

While reading, I was interested to find a reference to Marilyn in the first paragraph of Chapter 11 – a passage about Jester Clane, a teenage boy who disagrees with his grandfather’s prejudiced attitudes. Marilyn appears to him in a dream.

(Marilyn owned one of Carson’s novels, The Ballad of the Sad Cafe. I wonder if she knew that she was mentioned in another?)

“Who am I? What am I? Where am I going? Those questions, the ghosts that haunt the adolescent heart, were finally answered for Jester. The uneasy dreams about Grown Boy, which had left him guilty and confused, no longer bothered him. And gone were the dreams of saving Sherman from a mob and losing his own life while Sherman looked on, broken with grief. Gone also were the dreams of saving Marilyn Monroe from an avalanche in Switzerland and riding through a hero’s ticker tape in New York. That had been an interesting daydream, but after all, saving Marilyn Monroe was no career. He had saved so many people and died so many hero’s deaths. His dreams were always in foreign countries. Never in Milan, never in Georgia, but always in Switzerland or Bali or someplace. But now his dreams had strangely shifted. Both night dreams and daydreams. Night after night he dreamed of his father. And having found his father he was able to find himself. He was his father’s son and he was going to be a lawyer. Once the bewilderment of too many choices was cleared away, Jester felt happy and free.”

Photographer Douglas Kirkland’s 1961 photo shoot with Marilyn is the subject of an exhibition at the Burchfield Penney Art Center, in SUNY Buffalo State, which opens on July 12th, running through to September 8th.

“It feels good to come home, a place very special to me—I have wonderful memories,” exudes Kirkland, who commuted from Fort Erie to Buffalo to attend Seneca Vocational High School. Read an interview with him here.

A launch party for Love, Marilyn was held in New York yesterday, celebrating its upcoming broadcast on HBO (this Monday, June 17th.) Director Liz Garbus is pictured above with actors Jack Huston (John’s grandson), and Lili Taylor, who appear in the film. Among the other guests was Amy Greene.

Variety reports on the event:

“In a room in HBO’s corporate headquarters, attendees enjoyed a beautiful view of Bryant Park and were left to wonder what the exact ingredients were of a ‘Norma Jean’, a purplish concoction created for the event. (The answer? Watermelon-infused vodka and simple syrup, according to a bartender.)

‘You can feel Marilyn through this cacophony of voices,’ said Liz Garbus, the movie’s director.

And sometimes, you get the straight story. One of the people featured in the film is Amy Greene, a former model who was a friend of the screen icon.

‘I’m the only one that knew her, and I’m saying what actually happened,’ said Greene, holding forth in a coat closet so her raspy voice could be heard above the din of the reception. ‘No bullshit.'”

Garbus and Taylor also appeared on The Today Show, and you can view the footage here. 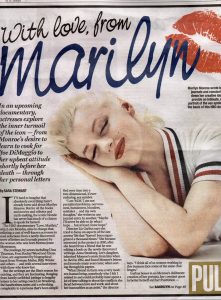 Marilyn also made the cover of the New York Post‘s entertainment section yesterday. Click the photo above to enlarge, or read the full article here.

“‘She wasn’t dumb at all,’ says actress Ellen Burstyn, one of the film’s readers. ‘She was smart — and very well-read. She read all the time, trying to educate herself. But she was fragile. She didn’t have the strength that someone gets if they have a loving mother and father. She was knocked around in foster homes, and she just didn’t have any psychological solidity.’

Still, says Burstyn, ‘she was smart enough to create the character of Marilyn Monroe.’

Amy Greene, widow of Monroe’s favorite photographer, Milton Greene, says Monroe was a lot more clever than she got credit for. ‘She knew everybody loved her as a dumb blonde, and the minute she got off the set she wasn’t that way,’ she says. ‘She was playing a character.'”

Philippe Halsman‘s 1952 photo of Marilyn ordering a hamburger at a drive-in restaurant is one of the selections in ‘Famous Faces: Picturing Celebrity in the Photographic Archives‘, a new exhibition, now open through to September 27, in the Ekstrom Library, at the University of Louisville, Kentucky, reports WHAS11.

A rare radio interview from 1955, at the premiere of The Rose Tattoo, has surfaced on Youtube. MM, Marlon Brando, and Sid Caesar discuss method acting, with Marilyn’s segment beginning ten minutes in. She is charmingly shy, but it’s here that we learn more about her work at the Actor’s Studio.

Kenneth Battelle, hairdresser to Marilyn, Jackie Kennedy and many others, died in New York last month. He was 86. Read my tribute to Kenneth here.

“It is the female stars Ms. Garbus lured that lift the film…the women who recite Marilyn’s own words–alternately scattered, precise, desperate, hopeful. There’s not a false note anywhere. Every woman seems deeply affected. As Garbus said, ‘Marilyn speaks to every woman’s inner self–love, family, the desire for perfection, satisfaction in her work. And the fears that she cannot ‘have it all.'”

“Amy is much as she was more than 50 years ago–highly attractive, chic, acerbic. She was fond of Marilyn, but it is a fondness devoid of sentimentality. ‘She wanted to be a movie star. A sex-symbol. She loved it. And she also wanted to be a great actress. She never saw why she couldn’t be both! And she sat in on every meeting. She knew what was going on, all the time.'” 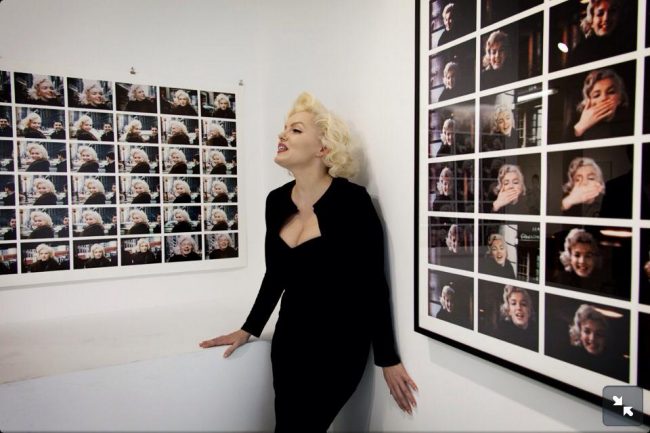 Marilyn Monroe: NYC, 1955, the exhibition of stills from Peter Mangone‘s home movie (now also a book), is now at the Galerie Walter Keller in Zurich, Switzerland, until June 29th. (MM lookalike Suzie Kennedy is pictured above, at the show.)

Photographer Mary Ann Lynch will be sharing her memories of the opening night at the original New York exhibit with us very soon. And you can read my tribute to Peter Mangone here.