NBC Los Angeles reports on the Marilyn-inspired treats on the menu at the Hollywood Roosevelt Hotel. Although Marilyn never lived there, she posed for this photo by the pool in 1952.

“Yes, the home of the first Academy Awards has seen hundreds of other thespians over the decades, both as residents and as party or dinner guests, but Ms. Monroe far and away is the most famous. Guests today can stay in the Marilyn Monroe Suite — it’s a spacious 750 feet and overlooks the Tropicana Pool — and now they can dine on treats inspired by the silver-screen starlet.

Public Kitchen & Bar is the place, and the treats? There’s a trio. Order the miniature Strawberry Blonde Cupcakes and discuss The Seven Year Itch as you eat them (the white frosting is meant to mimic the subway grate scene). The Marilyn Suite cocktail is made with strawberry vodka and some other fruit-sweet touches, and Neapolitan Meatballs serve as a savory reminder of the dish Joe DiMaggio taught Ms. Monroe to make.

The last dish is available during Public’s weekday happy hour.”

Pop star Rihanna has posted a series of Marilyn-inspired photos to Instagram this weekend, including this Ed Feingersh-style montage (courtesy of Photoshop.) In another, she dons a blonde wig. 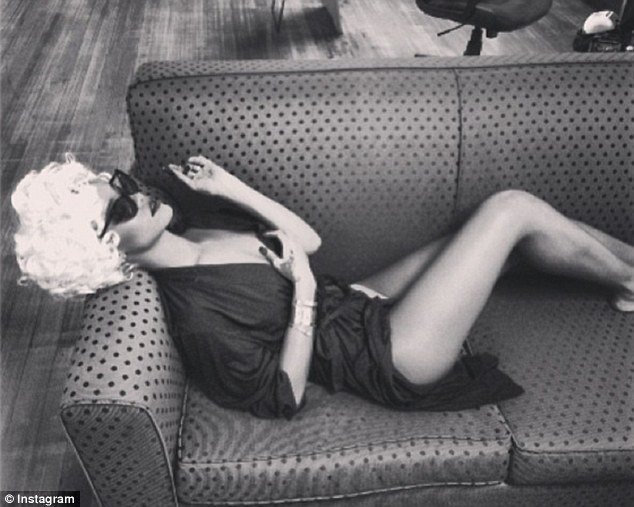 It’s not the first time the singer has referenced MM. ‘Red lipstick, rose petals, heartbreak / I was his Marilyn Monroe,’ is a line from ‘Love Without Tragedy/Mother Mary‘ on her latest album Unapologetic, possibly referring to her troubled relationship with Chris Brown.

Over at the New York Times, Charles Isherwood explores why, after two seasons, Smash lost its way with the public.

“Why tempt the showbiz gods by calling your show Smash in the first place? A $10 fortune teller on St. Mark’s Place might have steered the producers away from that choice. Perhaps it was hubris of Hollywood players to whom people rarely say no.

Also in the fate-tempting department was the decision to place at the center of the show a musical about the life of Marilyn Monroe. Those who follow Broadway know that an actual musical about Monroe ranks among the most notorious flops of the 1980s, which was a vintage decade for notorious flops. The real Marilyn: An American Fable churned through all sorts of personnel changes and turmoil before opening at the Minskoff and closing after only 17 performances, racking up a total of zero Tony nominations.

Sadly, watching most of the numbers from Bombshell, as the Marilyn musical in Smash was called — and once again, really, ‘bomb’? – I had the uneasy sense that I was discovering just how impossible it must have been to make a non-cheesy musical about such a complicated and celebrated figure. Although Mr. Shaiman and Mr. Wittman are skillful and smart songwriters, their ingenuity was soundly defeated by the inability to avoid all the obvious clichés of the well-worn Marilyn storyline.

Enter Hit List, the downtown musical that was brought into the plot line this season to provide a rival for Bombshell. Exit more credibility. This supposedly edgy show, hatched at a theater modeled on New York Theater Workshop, where Rent began (exterior shots were filmed there), was a flashy pop spectacle that tried with a panting desperation to ride the exotic coattails of Lady Gaga, and of course felt every bit as authentic as a teenager vamping before the mirror.

Tellingly, the funniest Smash joke didn’t happen on the show itself, but on NBC’s late, great 30 Rock. During the finale of that show’s penultimate season, after the travails of Smash had already become fodder in industry circles, Tina Fey’s character Liz gave proof of her unshakeable loyalty by exclaiming to her boyfriend, ‘Hey, I don’t bail, I’m still watching Smash!'”

The big-screen adaptation of Joyce Carol Oates‘s Blonde, which director Andrew Dominik has been talking up for a while now, has been optioned by Worldview Entertainment at this year’s Cannes Film Festival, reports Deadline.

An early portrait of Marilyn by Andy Warhol sold for $38.2 million (or $34 million before fees) at the otherwise low-key Phillip’s auction on Thursday, reports the New York Times. ‘Four Marilyns’, made shortly after Monroe’s death in 1962, has been acquired by the Gagosian Gallery on Madison Avenue.

The cover art for this 1956 issue of Time was created by Boris Chaliapin. Nicknamed ‘Mr Time’, he contributed 400 covers to the magazine and is remembered in a new exhibition at the Smithsonian National Portrait Gallery in Washington DC.

Gentlemen Prefer Blondes will be screened on Saturday, August 3rd – on the eve of Marilyn’s 51st death anniversary – at the Academy of Motion Picture Arts and Science’s outdoor cinema in Hollywood, as part of this year’s ‘Oscars Outdoors‘ series, reports Alt Film Guide.

Jean Bray, who worked as a publicist during shooting of The Prince and the Showgirl, will discuss Marilyn and others in ‘Life With the Stars’, as part of the Winchcombe Festival, near Tewkesbury in Gloucestershire, on May 25th.

‘Marilyn was never a diva,’ Jean – now 82, and an archivist at Sudeley Castle – tells the Cotswold Journal. ‘She was very fragile. She wanted to be a serious actress. She was trying her best to portray the character as she thought it should be. She fluffed her lines a lot and was often late on set. Olivier could be very cruel.’

Love, Marilyn will be screened on June 9, closing night of the ATX Television Festival, in Austin, Texas, reports AV Club.