“In her only memory of meeting Marilyn Monroe, Susan Bernard is 3 or 4 years old. She’s in Los Angeles, and the Hollywood legend is sitting in her father’s car.

‘It’s almost like a mirage,’ Bernard says. ‘An apparition. I remember she had blond hair, and she was called Marilyn. She was very sweet. She giggled a lot.'”

In a review of the excellent new book, Marilyn in Fashion, ArtInfo features some of the designers of her most iconic outfits, including Ceil Chapman (who created the purple beaded dress worn by Marilyn in Korea) and Charles LeMaire (who designed the black suit worn by Marilyn for her marriage to Joe DiMaggio.)

“When seeking as I always do for a Texas connection, I received a slender link courtesy of Gregory Schreiner, Marilyn Monroe expert and the President and founding member of the longest running Monroe fan club in existence today, Marilyn Remembered:  ‘On January 20th, 1961, en route to Juarez, Mexico, to obtain her divorce from Arthur Miller, Marilyn had a two-hour layover at the Dallas Love Field Airport. Supposedly, Marilyn sat alone in an airport cocktail lounge, watching John F. Kennedy’s presidential inauguration.’

It turns out, however, I found a stronger Dallas link: my husband’s thoroughly Texan late parents met her in person when my father-in-law took the family to a business convention in Los Angeles in 1959. While Grandma Vaudie minded the kids in their hotel room, H.L. and Gene Granberry ran into a host of stars leaving the ballroom: Jayne Mansfield, who spent years in the Park Cities, Gina Lollobrigida, Dick Powell and his wife June Allyson, Chuck Connors and Marilyn Monroe.

H.L., being H.L., managed to get a laugh out of Gina Lollobrigida. When she told him she was working on a film called Go Naked in the World (that would be released in 1961), he responded, ‘I would LOVE to!’. And everyone was nice to them. But the one they were most impressed with was Marilyn Monroe. It wasn’t just her looks, although my mother-in-law used to say she had the most translucent, beautiful skin and natural beauty of any one she had ever seen.

‘The word they kept using was gracious,’ my husband recalled. ‘The thing that struck my mother was that she was very warm, very friendly, very unpretentious, down to earth and a little sad. She made the most lasting impression of anyone they met that day. They had a feeling she related more to them, to normal people, than she did to the Hollywood crowd.’

The people’s star. Maybe that is why. to this day, we still can’t let her go.”

Over at The MMM Blog, Melinda Mason has details of the new MAC Cosmetics collection, which is Marilyn-inspired and due out in October. 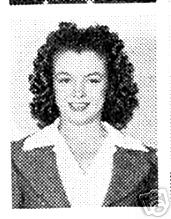 After writing a tribute to Marilyn for the San Francisco Chronicle, Mick LaSalle received this letter from a reader:

Reading your August 3 article about Marilyn Monroe [‘The Power of Marilyn‘] put me in mind of a family story about her that supports your analysis of her special charm. The story is my father’s, and here it is in brief:
My father Paul Johnsen attended the same junior high school (Emerson Junior High) as Norma Jean Baker in Westwood. He saw her for the first time early in his eighth-grade year while serving as a hall monitor when (to quote him) ‘this angel came walking toward me.’ Without ever meeting her or sharing his passion with anyone, he adored her from a distance for most of that year, before finally breaking down and confessing to a friend shortly before summer vacation. He suspects his friend told Norma Jean that Paul was crazy about her because at the last social event of the year, she approached him in a friendly manner and introduced herself.
The result was that my father dated her during the summer between eighth and ninth grades. Since they were both too young to drive, he (a well-to-do kid living in Westwood) would pick her up in his family’s chauffeur-driven car at her modest West LA home. He took her ice skating and taught her to skate. He always knew that she had no real romantic interest in him, that she was more mature than he, and he never dared to try and kiss her. But he says that when she was with him, she gave him her full attention, making him feel like he was the only person in her orbit. She was, he has always claimed, not only the most beautiful girl he has ever seen but one of the nicest people he has met.
The friendship only lasted the summer; they did not attend the same high school, and my father lost track of her, sensitive to the fact that his feelings for her were not returned. However, he always kept a wallet-sized school photo she gave him and a short letter she wrote to him. A number of years later, while out with his fiancée (later his wife and my mother). he stopped abruptly in front of a newsstand featuring a blond cover girl and exclaimed, ‘That’s Norma Jean!’ Of course, her early death saddened him.
Based on my father’s account, your assessment that ‘Marilyn makes people watching her feel that, if she knew them, she would like them’ is very apt. Even before she became Marilyn, when she was barely more than a child, she apparently had the gift of making others feel appreciated.
Sincerely yours,
Susan (Johnsen) Nordlof”

Michelle Morgan, author of Marilyn Monroe: Private and Undisclosed, has posted some interesting findings on her blog about Marilyn’s mother, Gladys Baker, and her friend Grace McKee’s life in Los Angeles during the 1920s.

“One of the things I loved, was when I discovered a news article about the Rayfield Apartments, where Gladys moved to with best friend Grace McKee, shortly after Marilyn’s birth.  The apartment block was situated at 237 Bimini Place and was fairly colourful – something that probably attracted the fun-loving Grace and Gladys.
I discovered a story that took place around about the very time the women lived at  the Rayfield, about a couple called Mr and Mrs Simpson, who also lived in the building.
Apparently the couple had had a big fight, and afterwards Mr Simpson took the unprecedented decision to phone the police, claiming that he had just murdered his wife.
Officers swarmed the block and began interviewing the ‘murderer’ Mr Simpson, but were shocked when Mrs Simpson – the murdered woman – walked into the apartment.  They interviewed her too and she of course denied all knowledge of ever being murdered by her husband!

Why Mr Simpson took it upon himself to phone the police and admit to killing a woman who was still alive and well is a mystery, but I always wonder – were Grace and Gladys at home when all this was taking place? Something tells me if they were, they most likely very much enjoyed the scandal going on just yards from their apartment!”

Another irony about this tale is that one of the songs from Gentlemen Prefer Blondes – later cut from the movie – was called ‘When the Wild, Wild Women Go Swimmin’ in the Bimini Bay.’

81 year-old Doreen Provost – a resident of Greenspring Retirement Community in Springfield, Virginia – recently told Jessica McKay at Burke Patch of her encounter with Marilyn Monroe back in 1954.

“In January 1954, Provost, a UCLA graduate, was working as an assistant buyer in the bridal department at the Joseph Magnin Company, a high-end San Francisco department store specializing in women’s fashion.

‘In those days, a bridal consultant was the person who not only sold you your wedding dress, but offered advice and services on all aspects of a wedding,’ said Provost.  She was called on to assist a couple getting married at City Hall.  Provost walked into the designer salon to find Marilyn Monroe and her fiancé, Joe DiMaggio.

‘Everyone was making a fuss over DiMaggio, because he was San Francisco’s golden boy,’ said Provost.  But Provost said she was focused on Monroe, who appeared, ‘nervous and out of her element.’  The couple indicated they wanted to have as traditional a wedding as possible, even though they could not be married in the Catholic Church due to DiMaggio’s previous divorce, said Provost.

‘Marilyn was sweet, shy and very quiet,’ said Provost.  After Monroe chose a suit with a fur collar, Provost helped her find a matching hat and white fur muff.  She also made sure Monroe had something old (her earrings), something new (her suit), something borrowed (a sales lady’s handkerchief), and something blue (a garter from Provost’s department).

‘She thanked me profusely as she left,’ said Provost.  ‘But what I learned that day was that beauty, fame, money and a charismatic husband cannot overcome feelings of insecurity.’

Just eight years later, Monroe was found deceased at her home, at only 36 years of age.  Provost remembers hearing of her passing.  ‘I thought, “I don’t believe anything I’m hearing,”‘ said Provost, who remembers Monroe as an unassuming woman seeking just a little confidence.  ‘The waste of that sweet young woman still haunts me.'”

Spyros Skouras, the Greek-born president of Twentieth Century-Fox, was an important ally of Marilyn during her early career. In September, the Greek America Foundation will research his life, including extensive study of the Skouras Papers at Stanford University, with the aim of producing a documentary. You can read more about the project here.

Barrington Public Library in Rhode Island will be screening Marilyn’s movies for free every Tuesday at 7pm this month: The Seven Year Itch (August 14th); Some Like it Hot (21st) and The Misfits (28th.)

Her diet and fitness secrets were discussed in the Daily Mail this week. You can also read an original article by Marilyn herself, ‘How I Stay in Shape’ (from Pageant magazine, 1952) here.