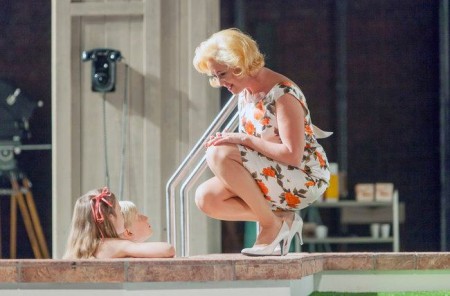 The New York Times reports on ‘Waiting for Miss Monroe’, an opera starring Laura Aikin which has just opened in Amsterdam. (As ES Updates noted in April, it is said to be loosely based on the highly dubious Miner transcripts.)

“After about 15 minutes one grasped the extent of Mr. de Raaff’s musical palette and sensed that Marilyn’s personality and the opera’s ambiance generally needed more variety. Only in fleeting moments did Mr. de Raaff break with austerity, as when rumblings of jazz announced the Kennedys or a quotation from Shakespeare brought a hint of something Elizabethan.

Originally conceived at 90 minutes without a break, the opera lasted two and a half hours, with one intermission. The original idea might have been better.

Fortunately, the vocal lines are well conceived for the voices — a decisive factor in Laura Aikin’s tour-de-force portrayal of the title role. She soars in the vocal stratosphere, shaping phrases expressively and with purpose. And her resemblance to the real Marilyn — figure and all — as dressed in the star’s familiar fashions (recreated by Clement & Sandôu, also responsible for the realistic décor) was uncanny.”