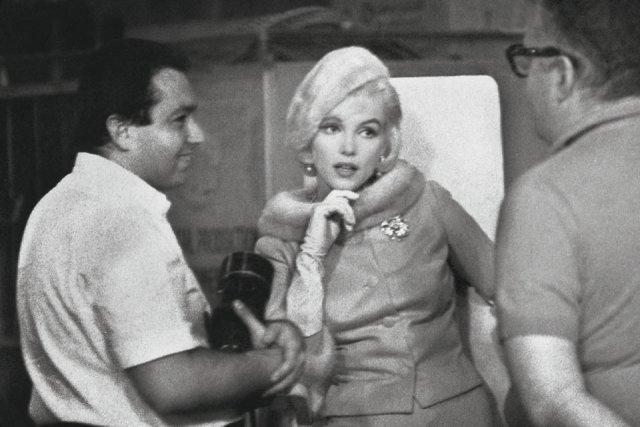 “In 1972, when I did the Marilyn book with Norman Mailer’s text and twenty-four photographers, I discovered that photographers were just mechanics with Marilyn. You put her in front of the camera; she knew exactly what she was doing. When Dick Avedon photographed her, he did those intimate portraits of her, but then he did her vamping all the other women of the world; you know Marilyn knew how to pose. I think she was different people to different photographers. She reinvented herself depending upon who was shooting her. Take Milton Greene’s pictures of her in the black. That’s him recreating the Marlene Dietrich pictures that he did, that’s Marilyn Monroe taking it a step further. Yes, you could play music; yes, you could fill her up with Dom Pérignon; and yes, photographers had to know lighting; but you got to tell Marilyn Monroe what to do? No way!

Marilyn was right there, right in your face. You could really feel the pores on her skin. Some people when you photograph them, their skin becomes for lack of a better word, dead; there’s a flatness to it. There was never a flatness to Marilyn Monroe’s skin. It was alive. She was constantly alive. She could look anyway she wanted. She certainly had professional makeup people, but I saw her doing her own makeup many times.

I think there are probably some unedited Marilyn somewhere. As an example in the new book, there are at least thirty images that came from the shooting for Look Magazine. I’m not exaggerating, until last year I had never looked at that shooting since the day the film was sent into Look magazine and Marilyn approved the contact sheets. They went into the Look Library, I owned the copyright. Look ran one picture of mine, some with Bob Vose, some with Guy Villet and John Bryson, who was a God to me. I just never looked at it. Now I look at it and I come up with this image, the first picture I ever shot of her. This picture was never published; it’s on the cover of the Talese book. It comes from a contact sheet she killed all except the one frame…Over fifty-two years I never looked at this contact sheet.

In those days, if you sold a picture for a cover for a thousand dollars, that was a lot of money; so a spread for Life Magazinefor six or seven thousand dollars, that’s a lot of money. The American Society of Magazine Photographers day rate was $100. a day in those days, so when we did like $80,000. worth of sales off basically one days shooting, next to David Douglas Duncan’s pictures of Picasso, probably the highest amount generated from one days worth of shooting. If you have exclusivity, you’re able to control the market.

I never even looked at the Marilyn pictures as anything artistic. I remember the thing that really blew me away, I had this image I took of Buster Keaton and one day I walked into Sammy Davis, Jr.’s home and there it was framed on the wall in his den. I just looked at it on the wall like a piece of art. It was the first time I ever realized that my pictures were something more than just that.”