The upcoming batch of new MM titles is featured in this week’s Bookseller (including much-anticipated titles from Michelle Morgan and Lois Banner.) 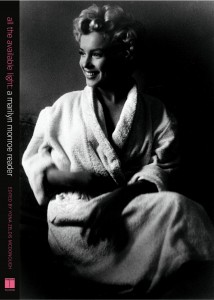 Yona Zeldis McDonough, who edited the 2002 anthology, All the Available Light: A Marilyn Monroe Reader, has also written fiction and non-fiction for adults, and books for children. She spoke recently about her thoughts on MM’s enduring legacy:

“You edited a highly praised collection of essays about Marilyn Monroe. Why were you initially drawn to this project and why do you think Marilyn has held such a fascination for her fans? Will you go see the new film My Week with Marilyn?

YZM: She is that forever compelling combination of beautiful and damned. Her Cinderella-like transformation from unwanted orphan/abused foster child to Hollywood star fulfills a very powerful fantasy so many of us seem to have. I have mixed feelings about the new movie; MM’s presence was so incandescent on screen that I see no need to watch someone impersonate her.  Yet the film will add to the discussion in some fashion and I suppose I will succumb.” – The Children’s Book Review

Riley Krull stars in Sugar, a new production of the musical based on Some Like It Hot, from April 4-22 at the 42nd Street Moon, Eureka Theatre, San Francisco.

Hello Norma Jeane, by London dramatist Dylan Costello, will be staged at 7.30 pm, on Saturday, April 14, at Center on Halsted Hoover-Leppen Theater, Chicago, where it is one of five contenders in a ‘Gay Play Weekend’.

“Joe has his life turned upside-down when his grandmother admits her deepest secret – that she is in fact Marilyn Monroe, coming out of hiding 50 years after faking her death in 1962. Can Joe really be the gay grandson of Marilyn Monroe? Joe’s search for the truth, his self-worth, and his love for his grandmother are tested to the limit in this funny drama that is full of surprises.

Native Londoner Dylan Costello is a screenwriter and playwright. His debut movie, ‘Coronado’, is currently in pre-production in Hollywood and his first two plays were produced in London in 2010. His short climate change film, ‘Edge of Existence’, was also shown at the Copenhagen Climate Change Summit in December 2009.” – Pride Films and Plays

This week’s episode focuses on the tension between Ivy Lynn (Megan Hilty) and her Broadway diva of a mother (Bernadette Peters):

‘WHAT WAS AWESOME: We get to see the workshop of “Marilyn” almost in its entirety which, frankly, is flippin’ fantastic. It’s a joy to see these numbers we’ve seen unveiled bit by bit strung together into a show, even if that show is deliberately not ready for a full audience just yet. This is a musical I’d see in a heartbeat, and Megan Hilty just kills it. Tonight’s new number, “Lexington and 52nd,” is a wonderful and dark DiMaggio number about how forgotten he feels when Monroe’s in the spotlight, and Will Chase growls through it with rage and charm. I love it when Smash gives us brand new music without the whole HEY LOOK, THIS IS NEW AND SWELL fanfare of marketing. it’s just slipped right in there amidst the workshop, and it’s flat-out cool.’  CinemaBlend

The London Film Museum is opening a new gallery in Covent Garden with a movie-themed exhibit from Magnum Photos.

Iconic actress Marilyn Monroe joins the prestigious collection in the emotive image of Eve Arnold captured in the Nevada desert whilst going over her lines for a difficult scene she was about to play with Clark Gable in the film ‘The Misfits’ by John Huston in 1960.

There will also be some exciting original artefacts including Eve
Arnold’s original Rollieflex, and Inge Morath’s Leica, not to mention original props, scripts and costumes. The photographers associated with Magnum have worked with movie-makers since its creation in 1947. Robert Capa, one of the founding fathers, had many friends in the film business – including Ingrid Bergman, Billy Wilder, and particularly John Huston – which gave him and other Magnum photographers access to the charmed and exclusive world of Hollywood.”

Film critic Mick LaSalle names Marilyn’s smouldering performance in Niagara among his ‘Evil Beauties of Cinema’, but with a caveat:

“Not Evil Even When She’s Being Evil: Marilyn Monroe in ‘Niagara.’ As Francois Truffaut said when he reviewed this film, Marilyn had no business playing evil characters. It’s just not who she was on screen.”

Well, I have to disagree with Truffaut on this. Monroe’s Rose is deliciously wicked, and the fact that we love her even when she’s bad is what makes Niagara so chilling!

Kylie Minogue has kicked off her ‘Anti Tour’ in Melbourne, wearing a Vivienne Westwood top emblazoned with a 1957 headshot of MM by Richard Avedon. Kylie previously wore an identical top back in 1994, reports the Daily Mail. 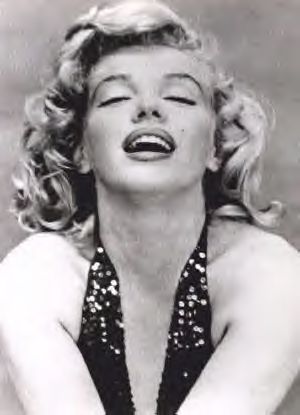 Photos from the estate of Allan ‘Whitey’ Snyder – soon to be auctioned at Julien’s – made the MSN homepage today.

MM collector Scott Fortner talks to Good Times about the ‘Legacy of a Legend’ and ‘Marilyn Unveiled’ charity gala and exhibit, coming up this Saturday, March 17, at Chaminade Resort & Spa, Santa Cruz.

‘It’s a testament to Monroe’s iconic status that a display of items from her off-screen life can still draw a crowd a full five decades after her death. One has to wonder what it is about the actress that makes her such a perennial subject of fascination. Fortner says he’s presented that question to each of the thousands of Marilyn Monroe fans he’s met over the years. “The one answer I receive time and time again is that people feel a need to protect her,” he notes. “I hear this from people who actually knew Marilyn, and also from casual fans born after Marilyn died.”’