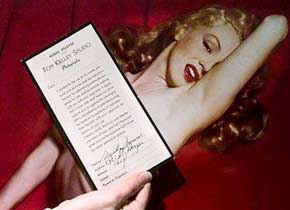 Over at Neatorama, Mike Albo considers how Marilyn turned the discovery of her nude calendar into a public relations triumph back in 1952:

“Before Paris Hilton and Pamela Anderson, there was Marilyn Monroe, the woman who taught those ladies everything they need to know about getting famous. By 1952, Monroe had been credited in 15 films, but most Americans didn’t know her name. She needed some publicity, fast. Around that time, wire service reporter Aline Mosby discovered nude calendar photos that looked suspiciously like Monroe. When the rumor mill started churning, 20th Century Fox warned the actress to stay quiet.

But Monroe had other plans in mind. In March 1952, she gave an interview, admitting the photos were of her and claiming she’d only done them to pay the rent. The outpouring of sympathy made Monroe the most talked about woman Hollywood. One month later she was on the cover of Life magazine, and her next movie, Clash by Night, was a smash hit. Biographers now think that the person who originally leaked the photographs was either Jerry Wald, an executive producer of Clash by Night, or Monroe herself. And that’s how a star is born.”