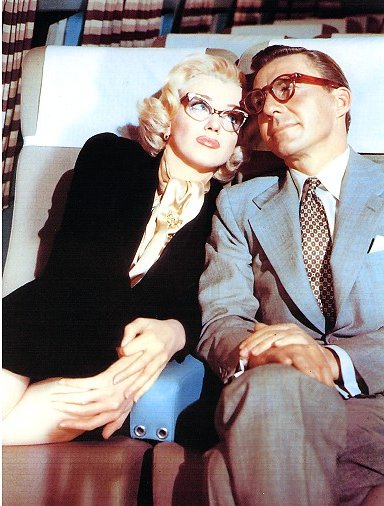 Over at Bad Reputation, a light-hearted look at women, glasses and the movies of MM:

“In The Seven Year Itch, the protagonist imagines his secretary throwing off her (tailored) jacket, throwing out her hair and losing the glasses, to reveal ‘I’m a woman! I’m flesh and blood!’

The weakness myopia is seen to connote in men is generally considered more attractive than the dowdiness it suggests in women – ‘You don’t think they make me look like an old maid?’ worries Marilyn-Pola, through her Dame Ednas, in How to Marry a Millionaire – and millionaire-seeking once again in Some Like It Hot, Marilyn hopes ‘her’ man will have glasses. ‘Men who wear glasses are so much more gentle, sweet and helpless’, she says. Indeed, there’s even a sense here that a man with glasses becomes less frightening or powerful, less brashly ‘male’. The only disadvantage for Marilyn is that when she kisses the one she finds, his glasses steam up.

But perhaps she has something when, in Gentlemen Prefer Blondes she asserts to her (bespectacled) groom’s disapproving father – who sees right through her gold-digging tricks – ‘Don’t you know that a man being rich is like a woman being pretty? You wouldn’t marry a woman just because she’s pretty but, my goodness, doesn’t it help?!’.  If a woman’s face is her fortune, best not to cover it with glasses, eh?

But actually, I think the time has come to take that as exactly the nonsense it is. Seeing is sexy. Wear your glasses with pride.”