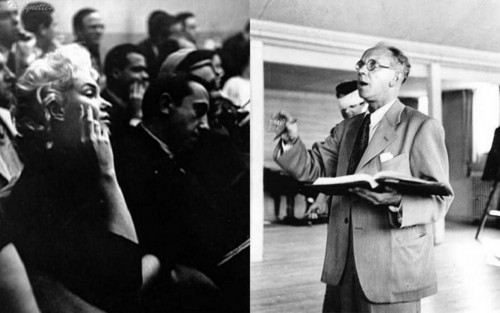 In his 2004 collection of essays on movie actors, Who the Hell’s In It?, director Peter Bogdanovich (The Last Picture Show) recalled his sole encounter with Marilyn:

“Only one time was I in Marilyn Monroe’s presence, and she never would have known it. During the winter of 1955, I was sitting a row in front of her at a Manhattan acting class being conducted by Lee Strasberg. Marilyn was 29, at the peak of her success and fame – with seven years left to live – wearing a thick bulky-knit black woolen sweater, and no make-up on her pale lovely face. The two or three times I allowed myself to casually glance back at her, she was absolutely enthralled, mesmerised by Strasberg’s every word and breath.  In his autobiography, Arthur Miller, who would marry her the following year, wrote that he felt Strasberg, though worshipped by Monroe, was a heavy contributor to his breakup with the actress, and that the acting guru’s domination was self-serving and exploitative of her. From the glimpses I had of Marilyn, Strasberg certainly had her complete attention and support, but in a strangely desperate way. She didn’t look contented or studious; she looked quite anxious and passionately devoted to Strasberg as somehow the answer to her troubles.”