“The more you look like Marilyn, the more you become what she so wanted to escape. She didn’t want to be the blonde, red-lipped, wiggle-walking object. She wanted to be an artist, a dedicated performer who should not be just an image. She was human.

I adore all the Marilyn impersonators, I think they have Norma Jean’s ‘character’ to a tee. Wiggle, Purr, Sigh, Open mouthed smile, Quiver lips, It all works in a wonderfully sexual and comical way. I was even offered to do Monroe impersonating but decided it was not for me. So as much as I love impressions, I still think they resemble a seaside caricature of what the lady was all about.” 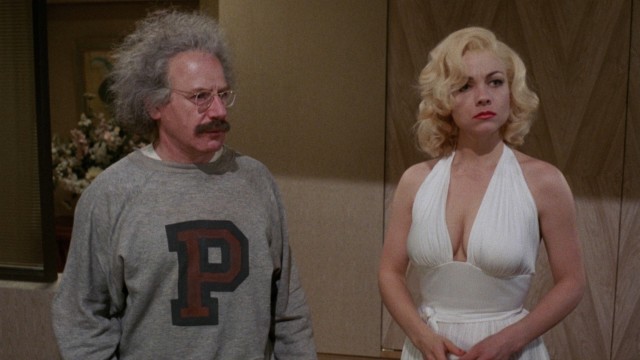 Over at Film School Rejects, an interesting review of Nicolas Roeg’s 1985 fantasy, Insignificance:

“We may be introduced to Monroe in a staging of the famous upskirt moment from The Seven Year Itch (1955), but this moment is de-authenticated and deconstructed as we’re shown the complex process of staging a deliberately career-defining moment. Later, Monroe explicates the Theory of Relativity to Einstein using some balloons, flashlights, and model trains. Insignificance poses that neither of these manifestations of Monroe are more ‘authentic’ than the other. That the film also co-stars Curtis – who famously co-starred with Monroe in Some Like It Hot (1959) and whose character attempted to comically seduce Monroe’s – acting here as McCarthy trying to seduce Monroe further confounds the line between the authentic and the artificial in the construction of the star image.

In creating a fantastic scenario based on these star icons, Insignificance makes the case that the ubiquitous image of the public figure does not belong to the person who embodies them, but to the public, for by entering the public and articulating a constructed persona, the star has already entered the realm of fiction.”

Marilyn’s brief, but stellar musical catalogue has featured on countless compilations. Over at AllMusic, William Ruhlmann takes a look at Monroe’s often overlooked talent as a singer:

“In the fall of 1962, 20th Fox Records released Marilyn, an album of soundtrack recordings from her films There’s No Business Like Show Business, River of No Return, and Gentlemen Prefer Blondes. It spent more than two months in the charts. The album was reissued in 1972 in a TV offer under the title Remember Marilyn. Around the same time, the Legends label released an album called Marilyn Monroe that included everything from film excerpts to a television commercial and Monroe’s performance of “Happy Birthday.” The album was reissued by Sandy Hook Records under the title Rare Recordings 1948-1962 in the 1980s. Starting in the 1990s, many small labels, especially overseas, released CDs that repackaged the same material. Monroe’s fame has only increased since her death, making such albums popular despite their repetitiousness and often inferior quality. In 1998, Varese Sarabande released a version of the soundtrack of There’s No Business Like Show Business including Monroe’s performances for the first time; the same year, Rykodisc reissued an expanded version of the soundtrack to Some Like It Hot. Marilyn Monroe’s singing constitutes a limited but significant part of her overall appeal as a performer. Especially because there is a tendency to focus on her fame and her troubled life over her actual work, it is worth listening to as an example of the real talent she brought to her performances.”

Listen to this KPCC interview with photographer Bert Stern at the launch of his new, deluxe book for Taschen at the Hotel Bel-Air in Los Angeles, where the 1962 session was shot.

Larry Schiller, who also photographed Monroe in the months before she died, also speaks. 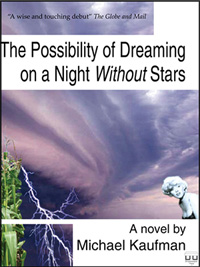 The Possibility of Dreaming on a Night Without Stars is a novel by Michael Kaufman, looking at one man’s search for a perfect love. Available now in ebook format from Shopkeeper Press.

What do Marilyn Monroe; love; a mid-forties male high school teacher; a smart, beautiful, but less-than-perfect woman; and, well, you, have in common?

I don’t want to give away the plot, but let me just say The Possibility of Dreaming on a Night Without Stars starts in the early spring with a story from a crazy old hitchhiker who says that not so long ago he saw Marilyn Monroe in a farmhouse somewhere in Ohio. As bizarre as this might be, the tale plants itself in Eli Schuman’s mind and won’t let go. The more he thinks about Marilyn, the more obsessed he becomes. Off he goes in search of this icon of the perfect woman.

It’s when he meets a woman who unexpectedly challenges his idea of perfection that Eli’s deepest journey really begins.’

The Sun Valley Story is a new, illustrated book by Van Gordon Sauter, tracing the history of the now 75 year-old ski resort, where Marilyn filmed scenes from Bus Stop in 1956. (The book also boasts an introduction by another Hollywood legend, Clint Eastwood.)

“The book was published on the occasion of Sun Valley’s 75th anniversary. Like I said – lots of photos that include Averell Harriman, Clint Eastwood, Gary Cooper, Ernest Hemingway, Marilyn Monroe, Bing Crosby, Bobby Kennedy, John Wayne and many others. The book transitions page by page from old chairlift and railroad photos and pictures of skiers wearing old wood skis with poles with big baskets to today’s modern terrain parks. The book is lots of fun to read and passing the time thumbing through all the photos.” – Idaho Statesman 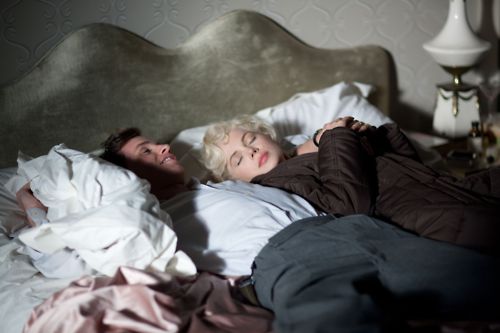 After seeing My Week With Marilyn, Mick LaSalle – film critic at the San Francisco Chronicle – read Colin Clark’s book, which gave him pause for thought:

In the account of the missing week, he and Marilyn have this wonderful interlude where she is kissing him and hanging out and sneaking off to spend time with him. In the book, unlike the movie, she even is willing to have sex with him, but he declines. They go skinny dipping, sleep in the same bed and really become close.

But in the DIARY section, THERE IS NO DIFFERENCE IN HIS ATTITUDE TOWARD MARILYN AFTER THE MISSING WEEK. Here he is, her big defender, who adores her, who could even have been her lover, had he chosen to do so, and yet at the end of the week, he is, in his PERSONAL DIARY, emotionless and even vaguely disdainful on the subject of Marilyn Monroe.

It’s also weird to write an account of something — AND LEAVE OUT THE BEST PART — and then go back five years later and, as an afterthought, get around to writing about your intimate friendship with a cinematic legend.

The thing that DOESN’T support his account is the issue of sex. One of the things that I liked so much about the film — and that made me initially believe in its veracity — is that MM and Colin never have sex and that it seems she never intends to have sex with him. Men writing accounts of Marilyn usually can’t resist LYING about their exploits with her. The fact that Clark didn’t made me believe him.

But as I alluded to in the above, in the book Marilyn more or less asks Colin if they’re going to have sex. They’re together in the bedroom, and she assumes it’s going to happen. But COLIN says no, you’re married, we mustn’t, you need your rest, etc. I have a much easier time believing in the vanity of an aging memoirist than in the moral restraint of a 23-year-old being offered a night of bliss with the most beautiful woman in the world.”

One of several pop icons depicted in tape by artist Erika Iris Simmons aka iri5.

“It feels great to work with strange, older materials. Things that have a mind of their own. Most everything I use has been thrown away or donated at some point. Past its prime, like some of the finest things in the world.” 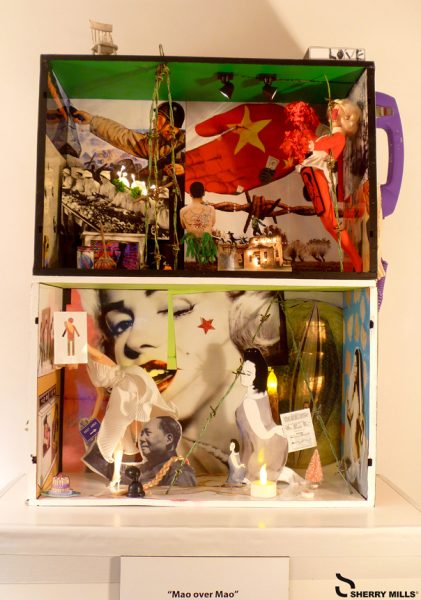