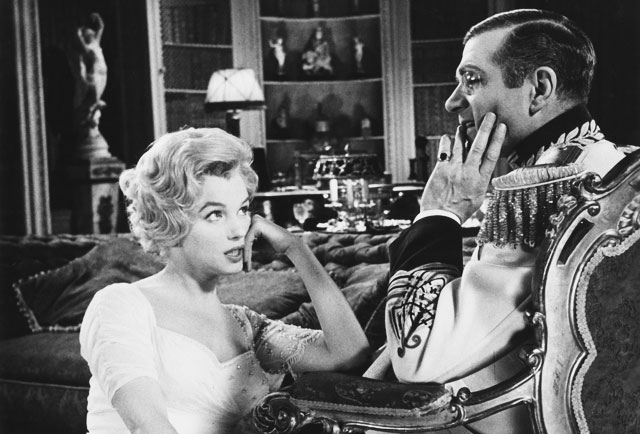 Vanity Fair‘s Bruce Handy re-evaluates Marilyn’s performance in The Prince and the Showgirl:

“The film is a classic example of Hollywood’s most prevalent genre: the awful movie made by talented people. The culprit isn’t Monroe’s neuroses, but rather a creaky, silly screenplay (adapted from what must have been a creaky, silly play). I wasn’t expecting it to be good, anyway, but I was hoping it would serve as a tutorial in opposing acting styles—Monroe’s intuitive emotional truths vs. Olivier’s precision-tooled affect. A clash of the titans, to reference another lousy Olivier movie.

Its best scene is a long would-be seduction, in which Olivier has invited Monroe to his apartment for a late-night repast. He then mostly ignores her, tending to business and assuming she’ll get drunk on his champagne and perforce go to bed with him. She, naturally, is onto him—she knows all the tricks—and here, Monroe is wonderful. Given a chance to show off her flair for comedy, she demonstrates that she too is capable of precise effects.

Olivier is a great on-screen, even in junk like this. For one thing, as the carriage scene shows, he understood stillness, and how to let the audience come to him, in a way that Monroe never did. She was more of a heat-seeking missile.

But it’s not a contest. When given the right scaffolding of dialogue and stage business, she too is great. Her greatest shortcoming as an actress, if it is a shortcoming, is that she didn’t know how to fake it. The second half of the film, where the story turns loopy and improbable—her character is forced into being a go-between for silly political intrigue—leaves her looking lost. Judy Holiday or Betty Hutton might have made it work, but that’s no knock on Monroe. The Prince and the Showgirl didn’t deserve to work. And when Monroe had real material—like with Some Like It Hot—she soared.”