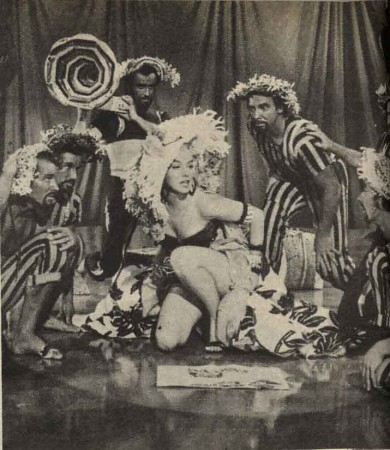 Dancer George Chakiris has spoken of his work with Marilyn with fondness and respect.

“It’s obvious that working with Monroe holds a special place in Chakiris’ memory. ‘The Diamonds number was choreographed by Jack Cole who was Marilyn’s favorite choreographer and Marilyn was absolutely right,’ Chakiris comments. ‘Jack choreographed for women unlike any other choreographer. One of my favorite credits is to say that I worked behind Marilyn Monroe and I love saying that. She was phenomenal. She only about twenty six when she made that film but Marilyn was an actress who was deeply concerned about her work and was very conscientious. Let me give you an example of her professionalism: If there ever was a cut for any reason, she never went back to her trailer to check her makeup. She’d be there on her starting mark and ready for the next take. Of course, she was extremely beautiful. I mean, what you see on film was what you’d see in person. There was a certain quality about Marilyn that I found to be kind, sweet and I’m sure she was a person who would never hurt a fly. I also remember her as being very quiet. She was not gregarious but was very concentrated on her work and it was phenomenal to watch her.’

Speaking of Marilyn Monroe’s dancing skills, Chakiris goes on, ‘She may not have been a trained dancer but she was musically gifted. She moved really well, she sang very well and she was a beautiful actress. She was a knock-out in every way. Her personal qualities came through on film. It’s like Audrey Hepburn whose personal qualities modified by her talent as an actress automatically came through on the screen. The person she was is what set her apart from other actresses. It was so rich and beautiful. Natalie Wood had that beautiful person quality as well. That’s what made these ladies so special.’

Chakiris recalls working on THERE’S NO BUSINESS LIKE SHOW BUSINESS which starred Ethel Merman, Mitzi Gaynor, Donald O’Connor and Marilyn Monroe. There was a cocktail party to which the dancers had been invited. Monroe walked in quietly with a few of her friends. ‘My partner in that film, Drusilla Davis, decided to ask Marilyn to come over and kiss me on the cheek. Marilyn sweetly looked over in my direction and said to Drusilla, But I don’t know him, and gently refused. I think little things like that are rather telling. She was very correct in her behavior and I admired her for that.'”