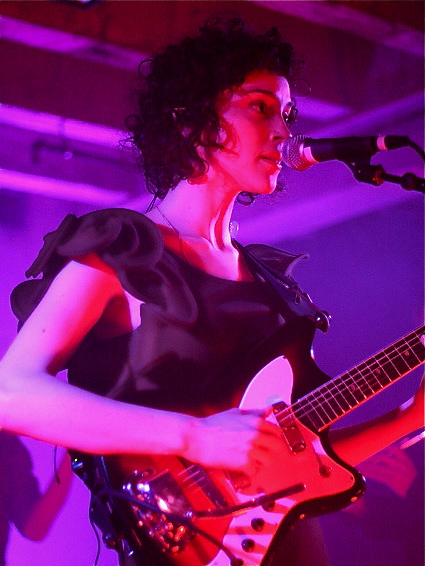 ‘Inspiration can come from unlikely places. Annie Clark, the Dallas-raised, Brooklyn-based musician who records as St. Vincent, was reading Marilyn Monroe’s recently published diaries when she came across a sentence that stood out to her: “Best finest surgeon,” the actress writes, “Strasberg waits to cut me open.”

“I thought that was an incredibly poetic line and a strange sentiment – wanting someone to come in and make that adjustment that will heal you,” says Clark, who adds that the troubled actress “was a highly intelligent woman and doesn’t get enough credit for being very powerful.” Clark pondered the line as she finished Monroe’s Fragments: Poems, Intimate Notes, Letters, and eventually she used it as the chorus for “Surgeon,” a stand-out on Strange Mercy, her third album as St. Vincent. It begins at a dreamily unrushed pace, with Clark’s florid vocals filling the frame and her spidery guitarwork adding detail to the background. The tempo gradually tightens until the song mutates into a breakneck jam between Clark and gospel organist Bobby Sparks. When it sounds like the song might simply snap in half, “Surgeon” fades out abruptly. Roll credits.

It’s a more vigorous and abrasive sound than expected from St. Vincent, and the lyrics prove equally strained and edgy. Rather than cinematic and critical, that voice sounds like that of someone desperate to be cut open. “I took elements of what I knew about Marilyn Monroe and superimposed them with something that I knew personally,” Clark explains. “I think it’s all fair game – whatever makes the best and most compelling story with a sturdy emotional truth to it.” ‘