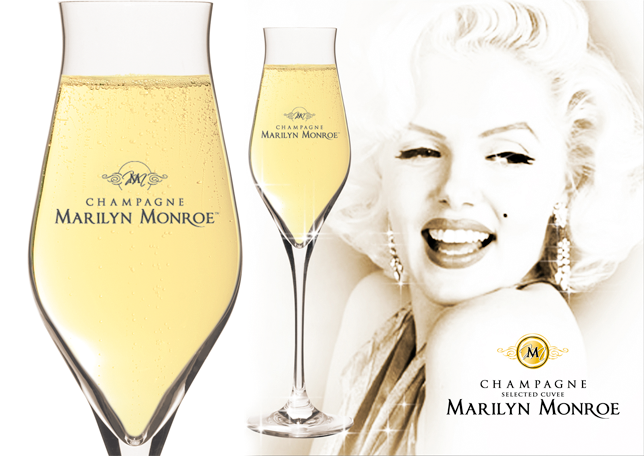 The Independent reports on a new champagne named for Marilyn. Fans will notice that the model pictured here is lookalike Suzie Kennedy.

“A Norwegian beverage company has bottled the legend of Marilyn Monroe in an effervescent bubbly to be served in a curvy, voluptuous champagne flute in her honor.

Champagne Marilyn Monroe Premier Cru Brut debuts at the world’s largest wine trade fair in Bordeaux this week, where 50,000 attendees from 47 countries are expected to converge.

Produced by the French champagne house JM Gobillard & Fils for Norwegian company Rosmersholm, the Marilyn Monroe champagne is 50 percent Chardonnay, 25 percent Pinot Noir and 25 percent Pinot Meunier and is produced in the Hautvillers, Cumières and Dizy areas of Champagne.

Described as fruity, silky and delicate, the champagne has an elegant nose and has been cellar-aged for three years.

It’s expected to retail for about €65. The champagne also comes with a set of six curvaceous flutes that retail for €159 alone.”