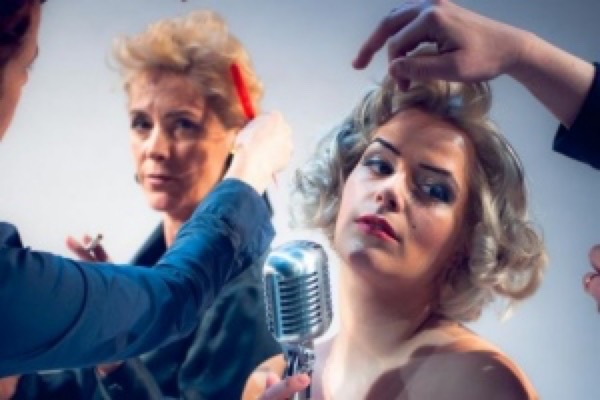 Francis Thorburn talks about the challenge of playing Marilyn at the Citizen’s Theatre, Glasgow.

‘When Frances Thorburn started rehearsals for the role of Marilyn Monroe in Sue Glover’s new play, ‘Marilyn’, she would occasionally have imaginary conversations with the long-dead star.

“I’m going to do my best to portray you well,” she would tell her.

Thorburn is keen that her portrayal in this play, which takes a snapshot of Monroe’s existence while she was making ‘Let’s Make Love’, does not diminish her subject. “One line I remember her saying in the last interview before she passed away is, ‘Please don’t make me out to be a joke.’ I have taken that to my heart.” Thorburn notes, too, that “Obviously Marilyn wasn’t perfect. She had some behavioural streaks that are hard to understand. But in those later years of her life she was on so many drugs – drugs to keep her awake, drugs to try to make her sleep. And I in my heart feel that she was a good soul. I want to honour that.”

In this new play, Glover takes as her focus the relationship between the actress and the French film star Simone Signoret, formed at a point in Monroe’s life when, as Thorburn points out, Monroe is emotionally “on a precipice”, suffering from insomnia and struggling in her marriage to Arthur Miller.

“I think if you get two icons in a room, or living across a hall, there are going to be [tensions],” Thorburn acknowledges.

“And also Simone is coming to Hollywood, so she’s coming to Marilyn’s domain. Meanwhile, Marilyn definitely wants to be the artist and taken seriously and talk about politics, which is what Simone is wonderful at.” Signoret was, she says, “phenomenal really: artistically, politically. And she was a beauty but she wasn’t about beauty. She hated that people would be wowed when she came in the room, so she dressed like a male.”

It is two days before she is to have her hair bleached the silvery blonde of Monroe’s and, in person, there is very little of “The Girl” about Thorburn. This is not surprising, given that she is a 21st-century woman living in a post-feminist world.

Thorburn is also a stage actor, not a film icon, working more in the chameleon-like tradition of deftly sliding between different roles. Her hair is the natural brunette that it has been all her life, her make-up subtle, her Glaswegian lilt only occasionally punctured by an energised girlish squeal. She is, she says, fascinated to discover how the colour-switch might change her. “Apparently, I have virgin hair,” she says, “which means it will be much easier to bleach. Will it alter how I perceive myself? I might have more kick, I might have more wiggle, I don’t know. Or I might be a little more introverted, more, ‘Don’t look at me’.”

When I call her several days later, post-transformation, it seems her feeling is very much the latter. Every time she passes the mirror she gets a flicker of shock, particularly since the blonde is so much whiter than what she expected. She is uncomfortable, too, out on the streets, “because I’m not very exhibitionist and people faintly turn their head”. But then, she points out, even Monroe didn’t always like to play Marilyn. “She knew how to turn it on or off, and she was able to get away with not being noticed.”

The problem for any actor playing Monroe therefore becomes clear. There is little footage that documents this “real” Marilyn, little to go on other than the interviews she performed towards the end of her life. In that sense, Thorburn has a certain freedom to improvise. “I don’t think there is any film of her real, which means I have to invent that, and that’s exciting as well because it means you have to bring your own self to it.”

She is keen not to “dishonour Marilyn”, while at the same time she is aware that the audience will be looking to see “a mixture of a real woman and the facade that she put on”. She points out that Signoret, in her autobiography, notes that in the whole of those months living alongside Monroe, she only saw her be “Marilyn” twice. Signoret also summed up Monroe’s predicament well: “Hordes of young girls never copied my hairdos or the way I talk or the way I dress. I have, therefore, never had to go through the stress of perpetuating an image that’s often the equivalent of one particular song that forever freezes a precise moment of one’s youth.” ‘

Read the interview in full at Herald Scotland