“Marilyn Monroe’s great achievement has been the making of herself and the imposition of her will and her dream upon a whole world. Joseph Conrad wrote that when we are born we fall into a dream. Norma Jeane Mortenson, called Norma Jean Baker, fell into the most extravagant of dreams. She made it come true. She made it come true by making herself. She made herself beautiful. She made herself an artist. She triumphed in that arena where the loveliest women in the world contend fiercely for the prizes.

In one sense, then, her life is completed, because her spirit is formed and has achieved itself. No matter what unpredictable events may lie in her future, they cannot change what she is and what she has become. And there will be many surprises and alterations in her life ahead; there will be, in Hart Crane’s phrase, ‘new thresholds, new anatomies’.

In her heart is a questing fever that will give her no peace, that drives her on ‘to strive, to seek, to find,’ and then to strive and seek again. Her soul was always be restless, unquiet.”

This is the final extract from Maurice Zolotow’s 1960 book, Marilyn Monroe: An Uncensored Biography, first printed in the Los Angeles Daily Mirror on December. It covers the filming of Let’s Make Love, and a postscript details her much-publicised affair with co-star Yves Montand. 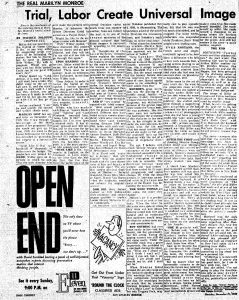 Zolotow’s biography, considered a definitive early work on Monroe, was reissued in 1990 with a further chapter on The Misfits, and an intriguing prologue where Zolotow describes his first meeting with the actress, at a Hollywood party in 1952, when she was still on the cusp of stardom. They would meet again ten years later, at the Actor’s Studio in New York, after Zolotow’s book was published.