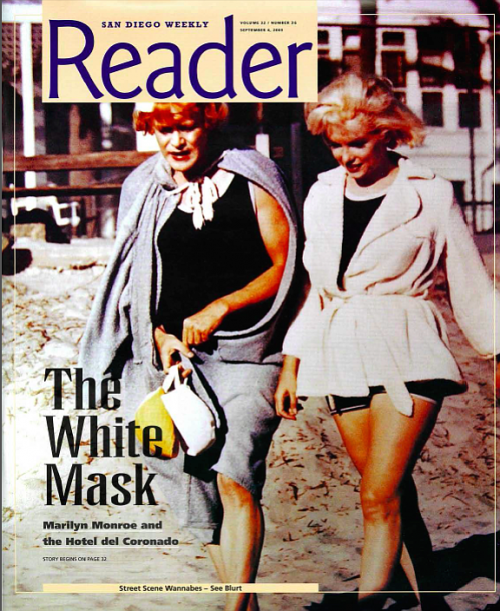 This fascinating article by Thomas Larson, about Marilyn’s quintessential role as Sugar Kane in Some Like it Hot, was first published in the San Diego Reader in 2003. Here’s a short extract:

“Graham McCann writes in his 1988 Marilyn Monroe, ‘The film is so significant for Monroe watchers, for it is the quintessential fiction on Monroe.’ The movie invites the audience who has followed her ‘personal highs and lows for several years to tease out the biographical references in Monroe’s character.’ This, McCann says, is what gets her fans into the theater.  For the film-makers of the 1950s, the question was always—how can the thrice-married Monroe be reflected to an audience who desperately wants her to find the right man? Answer: have art imitate life. Thus, a shy, bespectacled, unmanly Junior (Arthur Miller) meets a generous, ditzy, confessional Sugar Kane (Marilyn), and their unlikely, mixed-up, marriage-minded romance is the story. One the public knows already.

But there’s a price to pay for this too-complete identification. Since no actor can maintain her screen persona—despite the desires of audience and studio—the star like an animal ensnared in a steel trap begins to chew her foot off in order to get free. This is, essentially, the tragedy depicted in Wilder’s Sunset Boulevard. In fact, Monroe’s troubles during Some Like It Hot trace a similar emotional arc to those of Norma Desmond (played to pugnacious perfection by Gloria Swanson) in Wilder’s great 1950 movie. There, the deluded silent-film star tries to parlay her old glory in a thankless Hollywood and fails utterly. Playing the 24-year-old Sugar Kane, the 32-year-old Marilyn becomes as self-destructive in her life as Swanson’s Norma was in her role.”