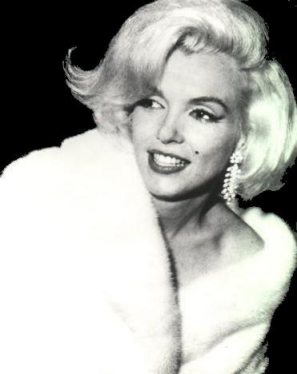 “As the 1950s gave way to the 1960s, film stars still inspired emulation – especially those stars who seemed to offer a new kind of fresh, youthful sexuality, less worldly than traditional glamour, but more intriguing than a femme-fleur. Marilyn Monroe, Brigitte Bardot and Audrey Hepburn were the icons of the time.

The most prominent screen glamour girl of the period, Marilyn Monroe, had a childlike, vulnerable quality, described by Diana Vreeland as ‘fluffy zaniness’. But Monroe herself embodied many of the contradictions of the era. In the early days of her career, photographed by Tom Kelley nude and stretched out on red satin, she came close to being labelled as ‘cheesecake’. She appeared to lack the self-possession that had distinguished many of the screen goddesses of the 1930s, and she seemed more innocent than other pin-up girls. Monroe was never the girl next door however, and could be capable of a sharp realism. ‘I guess I’ve always had too much fantasy to be only a housewife,’ she confessed on one occasion, adding, ‘Well, I also had to eat. I was never kept, to be blunt about it. I always kept myself. I have always had a pride in the fact that I was on my own.’

Perhaps one of the last high moments in the classic Hollywood celebration of glamour was when Marilyn Monroe, in a memorable public performance, sang ‘Happy Birthday’ to John F. Kennedy in Madison Square Garden in May 1962. She wore a gown by Jean Louis in nude marquisette covered with rhinestones, described by Adlai Stevenson as ‘skin and beads’. In 1999 the gown sold at auction by Christie’s for $1.2 million.”