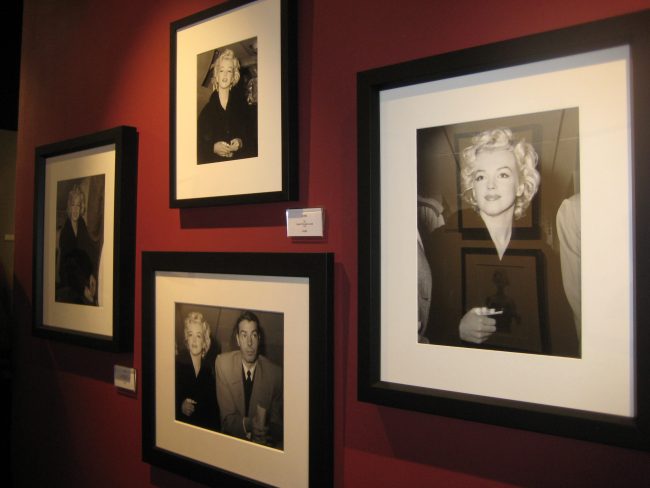 Among the more rare items on display at the ‘Becoming Marilyn’ exhibition, at the Andrew Weiss Gallery in Los Angeles, are these photographs of Marilyn Monroe and Joe DiMaggio arriving at Tokyo Airport in March 1954 for their honeymoon, taken by Kashio Aoki.

Allie Is Wired reports that Bill Carroll, one of the first professional photographers to work with then-model Norma Jeane Dougherty in 1946 made a special guest appearance at the gallery last week, and shared his memories of the young MM. (The article dates Carroll’s photographs to 1945, but from her hair colour I would say it was taken a year later.)

“In 1945, Carroll was in need of ‘cover cards’ for his film business and decided to schedule a Santa Monica photo shoot with his friend’s recent catch, Norma Jeane. Carroll wanted a ‘good-looking Plain Jane, the kind of kid you’d like to live next to’ and thought Norma Jeane fit the bill. It wasn’t until 40 years later when ‘leafing through Time Magazine’ that Carroll recognized a picture of Norma Jean by David Conover that he processed oh so many years ago. Carroll spent the next few months going through old photographs until he found all of the 1945 photos of a young Marilyn Monroe posing in Santa Monica.”